Tanks, Artillery join Israeli jets in a counter-offensive against Hamas

Trouble loomed on another front late Wednesday, when three rockets fired from Lebanon landed in the Mediterranean off Israel's northern coast, raising the prospect of a new battleground with Iran-backed Hezbollah militants. 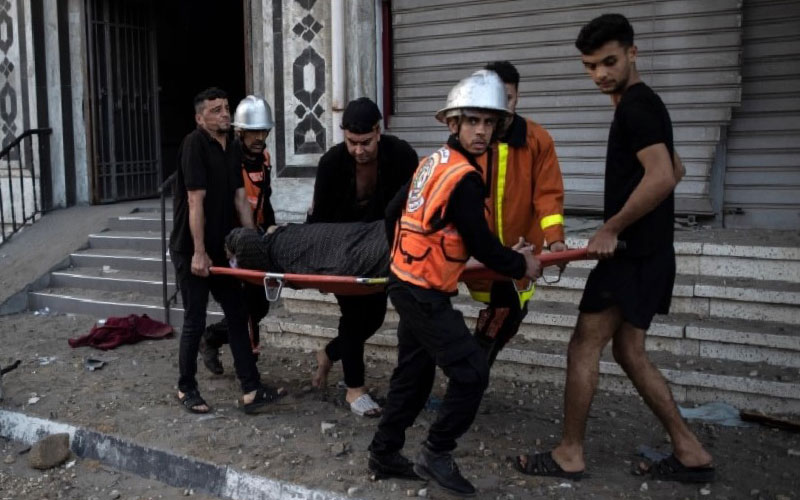 After four days of aerial bombardment failed to quell the deadliest militant rocket fire on Israel from the Palestinian enclave, Israeli air and ground forces launched a blistering attack on the Hamas-run Gaza Strip, ignoring international calls for a cease-fire.

Prime Minister Benjamin Netanyahu has warned that a long campaign is on the horizon. The decision to use heavy aircraft, tanks, and artillery fire early Friday came at a particularly tense time, as Israel was dealing with the worst outbreak of violence between Arabs and Jews within its borders in years.

Trouble loomed on another front late Wednesday, when three rockets fired from Lebanon landed in the Mediterranean off Israel's northern coast, raising the prospect of a new battleground with Iran-backed Hezbollah militants.

Netanyahu wrote on Facebook, "I said that we would exact a very heavy price from Hamas," referring to the militant group. “We are doing so with vigour and will continue to do so. The last word hasn't been spoken, and this push will go on for as long as it's needed.”

On Thursday, the death toll and destruction caused by the raising fight. Hundreds of Palestinians and Israelis have been killed, and hundreds of buildings have been damaged or destroyed across Gaza. As part of a larger international effort to resolve the war, an envoy from

Egypt arrived to speak with both sides. Egypt has historically been active in resolving Israel-Gaza bloodshed.

On Sunday, the United Nations Security Council will hold an emergency meeting to discuss the conflict.

Avichay Adraee, a spokesman for the Israeli Defense Forces, said early Friday that 160 warplanes launched airstrikes after midnight, dropping 450 bombs and missiles on 150 targets, including Hamas tunnels in northern Gaza. He went on to say that a drone launched from Gaza was intercepted.

On Monday, violence erupted as Netanyahu's opponents attempted to form a coalition to unseat him, the country's longest-serving prime minister. When a key potential coalition member backed out due to the clashes, he was given a lifeline.

The dispute is on the verge of devolving into a full-fledged war that could pull in other regional players. “Restoring peace will take more time,” Netanyahu said on Thursday, as the military was permitted to call up 9,000 more reservists and prepare scenarios such as a land invasion.

Army Radio quoted military spokesman Brigadier-General Hidai Zilberman as saying, "Ground forces are ready and studying the terrain." “When we think it's time, we'll trigger them.”

President Joe Biden defended Israel's response to Palestinian rocket attacks, claiming that there has been no "serious overreaction."

Late Thursday, Gaza militants fired a barrage of rockets at Ben-Gurion International Airport, but no damage was confirmed.

Since Hamas took control of Gaza in 2007, Israel and Gaza have waged three battles, the most recent of which was seven years ago.