Twenty years ago US military Forces removed the Taliban but now they have once again captured the power. The Taliban has said that it plans to soon declare a new 'Islamic Emirate of Afghanistan.' 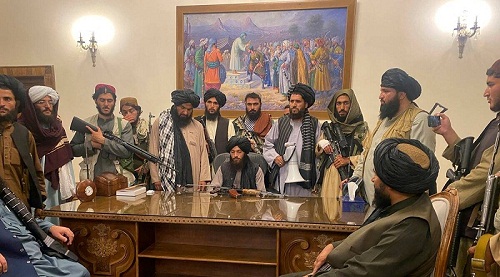 New Delhi: The terrorist group Taliban has taken full control over Kabul as American-backed President Ashraf Ghani and many other leaders fled the country. Twenty years ago US military Forces removed the Taliban but now they have once again captured the power. The Taliban has said that it plans to soon declare a new 'Islamic Emirate of Afghanistan.' They have taken over the presidential palace and said the war is over as President has fled the country, now the safety of the citizens is our priority. Meanwhile, the UN Security Council will on Monday hold a meeting on the situation in Afghanistan.

The Indian government has told Air India to put two aircraft on standby for emergency evacuations from Kabul, sources said. Air India has prepared a set crew for emergency operations from Kabul to New Delhi. In another development, India will not be able to bring its citizens back from Afghanistan because the Airspace of Afghanistan has been shut. the latest news is that US Troops have opened fire at Kabul airport and several people have died and many injured. There was complete Chaos at Kabul's Hamid Karzai International Airport as Afghans rush to leave the country. People are seen walking on the roads with their luggage towards Airport to catch the flight to leave Afghanistan. News is also coming that President Ashraf Ghani has sought asylum in Tajikistan. It is also said that few Afghan leaders have reached Pakistan. They are holding meetings about the situation in their country.

Around twenty countries issued a joint statement on  Monday calling "those in positions of power and authority across Afghanistan" to allow Afghans and foreigners to depart safely if they wish, to keep borders open and maintain calm. In Delhi, citizens of Afghanistan are protesting outside the Afghanistan Embassy. They are here for different reasons, some are on a student visa and some are on health visas. They are worried about their families but don’t want to go back home.

Taliban has also released their supporters from the Jails. The Taliban have released prisoners from Bagram Air Base. Afghan forces at Bagram Air Base, home to a prison housing 5,000 inmates, surrendered to the Taliban, according to Bagram district chief Darwaish Raufi. The prison at the former US base held both Taliban and Islamic State group fighters..

“Dreaded terrorists of ISIS, Al-Qaeda, Taliban & other terror groups who were prisoners in Kabul Jails of Afghanistan are RELEASED by Taliban for the rest of world. Dear World, Face the music of terror now !” Major Surendra Poonia tweeted. People are saying that this is the end of a two-decade engagement sparked by the September 11, 2001 terrorist attacks.