Pollard says it is heartbreaking as West Indies slip out of Super 12s. 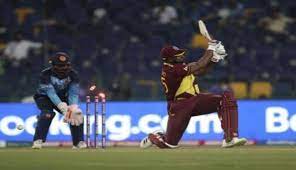 Abu Dhabi- On Thursday, Kieron Pollard announced himself heartbroken but determined to fight on in the international game as West Indies’s Super 12 fate was ensured with defeat to Sri Lanka. The Windies saw their ICC Men’s T20 World Cup title defense flounder further as they went down by 20 runs in Abu Dhabi, making the top two an unreachable target. Pollard’s side was second best with bat and ball with the skipper pointing his finger at the former as central to their struggles. He said I think it’s heartbreaking.

He further said A lot of different things might have gone wrong from the start of the tournament, during the tournament. The batting has struggled throughout the entire tournament. It has been disappointing, it is something we have seen over and over and it’s something that hasn’t helped us.

He also said, We just have to accept we weren’t good enough. The guys are disappointed. I am disappointed in myself. Hopefully at the end of the campaign when it’s finally over, we’ll be able to sort of give some information about what we think or what we thought might have gone wrong.