Bella Hadid took to her Instagram to share Israeli brutalities and called out the Hypocrisy of the major Western Media Houses. 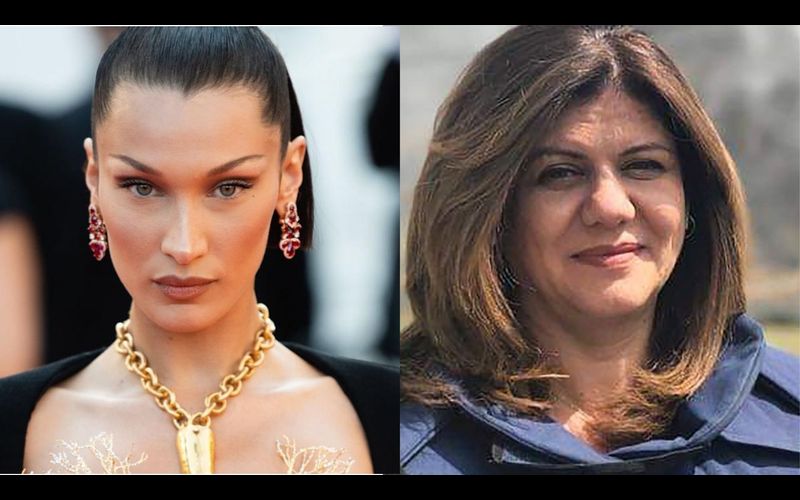 In regards to the assassination of the Palestinian Journalist Shireen Abu Akleh, who worked as a reporter for the Arabic-language channel Al Jazeera for 25 years, Supermodel Bella Hadid penned an emotional post on Instagram. Shireen had been a household name across the Middle East for her decades of coverage in the Israeli-occupied Palestinian Territories.

She also shared a heart-wrenching clip of her funeral procession wherein brutal Palestine Forces are trying to remove those who attended the funeral of the legendary Palestinian journalist.

She wrote, "What kind of a threat are people mourning a loved one? This is a funeral procession to lay a Palestinian veteran& legend to rest. Beyond anything, she is a human being. Shireen’s life as a Palestinian journalist has always been a threat to them, dead or alive. Although, we are never failed to be reminded that our existence as Palestinians is a threat in general, journalist or not. She had no weapons, showed no violence, just a camera. In return? A sniper bullet to the head. Repetitive shots at anyone who tried to help revive her. What do you have to hide that you continue to kill our journalists? That says enough about this military system, their government& the geopolitical game they pawn their people off to."

Posting a picture of Shireen, Hadid wrote, “Shireen dedicated her life to exposing Israeli military violence — and it is ultimately what killed her. She revealed Israel’s policy of letting its soldiers get away with murder — which is currently leading it to fabricate lies about her own targeted assassination. And she did all of this in an incredibly hostile, biased, dishonest media landscape that reports Israel’s lies as facts and erases Palestinians’ truths — now, including the truth of her own killing.

The Caption called out the hypocrisy of the prominent Media Houses, stating, "NY Times, AP News, and the entirety of Israeli and Western media: face facts. Multiple eyewitness accounts tell us an Israeli sniper directly targeted Shireen while she was covering an Israeli military raid in Jenin, a Palestinian refugee camp. She was wearing a press vest and a helmet, and the sniper shot her with extreme precision, near her ear, where the helmet didn’t cover (swipe left). This was a targeted assassination."

She further added, "The sniper’s murder of Shireen is part of a larger pattern of Israel eliminating Palestinian journalists, the people who speak truth to power and expose Israel’s crimes to the world. Since 2000, the Israeli military has murdered 55 Palestinian journalists, whom it views as being “armed with cameras” (as military spokesperson Ran Kochav said of Shireen today). The Israeli sniper killed Shireen not despite her being a journalist, but precisely because she is one. We call for justice for Shireen, as we do with ALL murdered Palestinians, by demanding the US government end its $3.8 billion in annual funding to the Israeli military. Like Omar Asad, an elderly Palestinian whose egregious murder by the Israeli military was gravely misreported by the same news outlets earlier this year, Shireen is an American citizen. The Biden administration cannot ignore this — and we won’t let them. As Congresswoman @Rashidatlaib said, “@POTUS, whether you’re Palestinian, American or not, being killed with U.S. funding must stop."

“I chose journalism to be close to people. It may not be easy to change the reality, but at least I was able to make that voice heard in the world.” - Shireen Abu Akleh” -, the caption further read.

This has happened after the Joe Biden Administration has received criticism for its silence over the Journalist’s Killing. This is not the first time Bella has extended her support to the Palestinians, and the Israeli Occupied Palestinian Territories.