Due to high winds early last Tuesday, the Ever Given which is 400-meter-long became lodged diagonally across a southern portion of the canal, blocking traffic on the shortest shipping route connecting Europe and Asia. 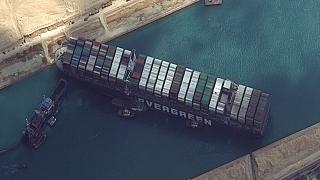 The Japanese owned and Panama flagged cargo ship, MV Ever Given which had made huge headlines in the last week for blocking the Suez Canal has been set afloat successfully according to a canal service provider, on Monday.

Using tugboats, rescue workers from the Suez Canal Authority and a group from Dutch company Smit Salvage were able to partially float the ship earlier on Monday with slight help by the peak of high tide after dredging and excavation work over the weekend.

The SCA has issued a warning that clearing the traffic jam of ships trapped at the canal's northern and southern ends would take more than three days.

Peter Berdowski, Chief executive of Boskalis, the salvage company which was responsible for extracting the cargo ship said, "I am excited to announce that our team of experts, working in close collaboration with the SCA, successfully refloated the Ever Given, thereby making free passage through the Suez Canal possible again.”

Due to high winds early last Tuesday, the Ever Given which is 400-meter-long became lodged diagonally across a southern portion of the canal, blocking traffic on the shortest shipping route connecting Europe and Asia.

The news of the reopening of the Suez Canal which links the Mediterranean and the Red Sea, and which witnesses more than 10% of global trade pass through it, led to depreciation world oil prices.