The Chairman is informed that an official announcement in this regard will be made tomorrow after re-verification of the figures and completion of all legal proceedings. 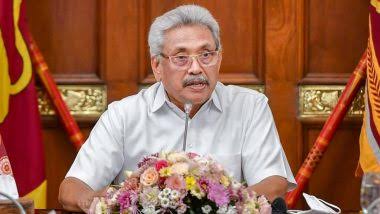 This is followed by celebrations by protesters across the whole country including Colombo. People celebrate at Galle Face Park after the resignation of Sri Lankan President Gotabaya Rajapaksa.

Sri Lanka's DailyMirror tweeted a photo shared on social media showing President Gotabaya Rajapaksa and First Lady Ioma at Terminal 3 of Changi Airport in Singapore. The picture was taken by another passenger. According to the Singapore Foreign Ministry, Sri Lankan President Gotabaya Rajapaksa has come on a personal visit, he has not sought asylum nor has he been granted asylum. Speaker Mahinda Yapa Abhaywardene said Parliament would be convened within three days of receiving the President's resignation letter. With Gotabaya Rajapaksa resigning this evening, the process of convening Parliament is expected to resume.