The couple's pictures of tying the knot on the plane went viral on social media. SpiceJet has also been instructed by the DGCA to file a lawsuit with the relevant authority on those who do not meet Covid-19 guidelines. 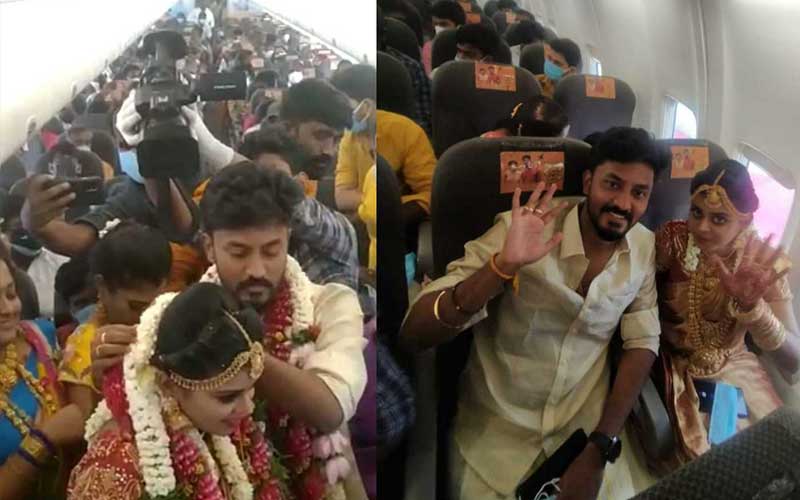 To prevent the transmission of the coronavirus pandemic, India has imposed strict restrictions on public events, including wedding ceremonies. Therefore, a Madurai couple tied the knot in the air to get around the limits, yet ended up breaking the Covid-19 rules in the process. And now, the Directorate General of Civil Aviation (DGCA) on Monday ordered strict action after a picture went viral of a couple exchanging vows onboard a chartered SpiceJet aircraft.

A Madurai couple is seen getting married on a plane with their friends and relatives around them in a video that has gone viral on social media. They had planned to fly from Madurai to Bengaluru on a SpiceJet flight. The wedding was solemnised during the flight. On social media, a video of the wedding ceremony, which was held on the plane in utter violation of Covid-19 rules, went viral.

The couple and the people around them were seen without any facemasks and were not observing any social distancing in the 7-second video posted on social media.

“In response to the incident of a Madurai couple getting married onboard a SpiceJet flight yesterday, the DGCA has ordered SpiceJet to file a complaint with the related authority against those who did not obey Covid-19 acceptable behaviour,” a DGCA official responded to the media.

“The crew has been de-rostered. We are investigating this and will take appropriate action,” the official added.

The pair had booked the flight from Madurai to Bengaluru for their wedding ceremony, as per the reports. And when the plane passed over the historic Meenakshi Amman Temple in Tamil Nadu district, the couple reportedly tied the knot.