Bollywood actor Sonu Sood on Friday announced that he has tested negative for COVID-19 after contracting the deadly virus earlier this week. 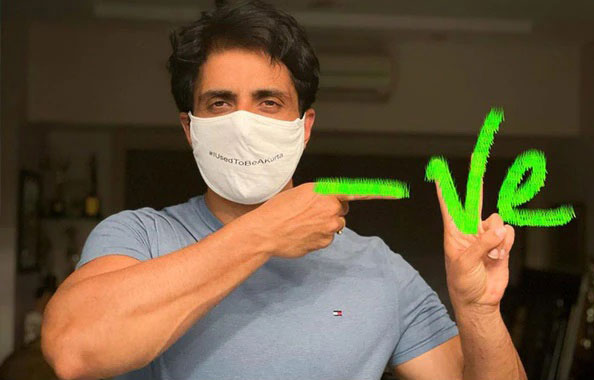 The `Dabangg` actor, who tested positive for the virus on April 17, took to his Twitter handle to announce the news.

Sonu posted a picture in which he is seen wearing a white coloured while striking a victory pose for the camera. With a green colour graphic paintbrush, he drew `-ve` on his victory pose snap.

Keeping the caption short yet apt, he wrote, "Tested: COVID-19 Negative". He wrote on his social media that :- "Hi everyone this is to inform you that I have tested positive this morning for COVID-19. As a part of precautions, I have already quarantined myself and taking utmost care but don`t worry this gives me ample time to solve your problems remember I am always there for you all," he wrote at that time.

On a related note, the 47-year-old actor took his first dose of the COVID-19 vaccine at Apollo Hospital, in Punjab on April 7.

The second wave of corona virus infected a lot of people and the number of COVID-19 positive cases has been rapidly rising.

In Bollywood, an array of celebrities has got infected within a span of a few weeks. Recently, Neil Nitin Mukesh, Manish Malhotra, Katrina Kaif, Akshay Kumar, Govinda, Paresh Rawal, Alia Bhatt, Ranbir Kapoor, and Rohit Saraf, among others had tested positive for COVID-19.

Meanwhile, on the film front, Sonu Sood recently announced a new movie titled `Kisaan`, to be directed by E Niwas and backed by filmmaker Raaj Shaandilyaa.

Apart from that, he will also be featured in Chiranjeevi-starrer upcoming Telugu movie `Acharya`. Sonu will also be seen in Akshay Kumar-starrer `Prithviraj`, which is slated to release on November 5, this year.