So Near And Yet So Far! Indian Golfer Aditi Ashok Misses Out On Bronze Narrowly By Just One Shot

Aditi finished 4th in Women’s Individual Stroke Play Golf in Tokyo with 15-under 269, two strokes behind gold medalist Korda of USA. The 23-year-old Indian was in the medal hunt till the 72nd hole. Another Indian Women golfer Diksha Dagar was also in action, but she was not in the medal hunt. She got the 50th position. 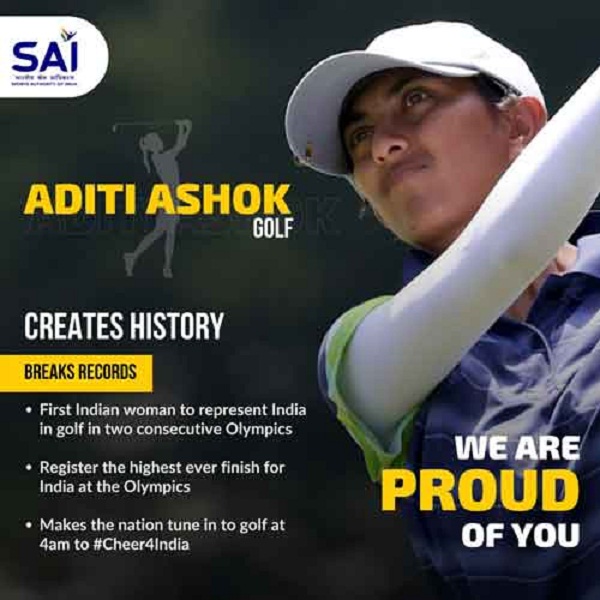 New Delhi: Golf was not so talked about in India, but since yesterday lakhs of people eagerly waited for the final result of Golf’s  Individual Stroke Play Women’s event. Hundreds of  People used Social Media to give their best wishes to Aditi Ashok, who was in 2nd place, a Silver medal position, after completing three rounds in three days of play at the Kasumigaseki Country Club.

On Saturday Aditi started well in the 4th round but very narrowly missed out on the Bronze medal, by just one shot. It was a heartbreaking moment for the World No. 200 player. She will definitely regret this at least, for three years, as another chance of winning an Olympic medal will now come in 2024 Paris.

Another Indian Women golfer Diksha Dagar was also in action, but she was not in the medal hunt. She got 50 positions with 290. Diksha started the day with 51position, way behind the medal race.

Aditi finished 4th in Women's Individual Stroke Play Golf in Tokyo with 15-under 269, two strokes behind gold medalist Korda of USA. The 23-year-old Indian was in the medal hunt till the 72nd hole. In round four, Aditi sealed three birdies and finished a creditable fourth. She was battling toe to toe with World No. 1 Nelly Korda of the USA and former World No. 1 and Rio Olympics silver medalist Lydia Ko of New Zealand, impressing with her putting and short play skills.

With Japan’s Mone Inami putting on a superb show with 10 birdies, the race for the medal went until the final shot, the 72nd which got underway after a rain break on Saturday morning at the Kasumigaseki Country Club Aditi was at the 4th spot with 15-under before the final hole while Nelly Korda and Mone Inami were tied for the top spot with 17-under while Lydia Ko was at the 2nd spot with 16-under.

Aditi scored Under 4, 5, 3, and 3 in her four rounds. Her best performance was in the second round when she had a card of 5 Under. Her total card read 25 Under Par. Aditi Ashok had emerged as a surprise contender in Women’s Golf for a medal. What made her prospects more intriguing is that there was a typhoon forecast in Tokyo on the weekend. If all 18 holes would not have been played on Saturday, Aditi Ashok would have won silver based on her rank at the end of the third day. Today's Game was stopped for some time because of rain but it started soon.