The clip of a 25-year-old Steffi Graff on-court marriage proposal that she got from a fan has taken the internet by storm, on the tennis legend’s 52nd birthday. 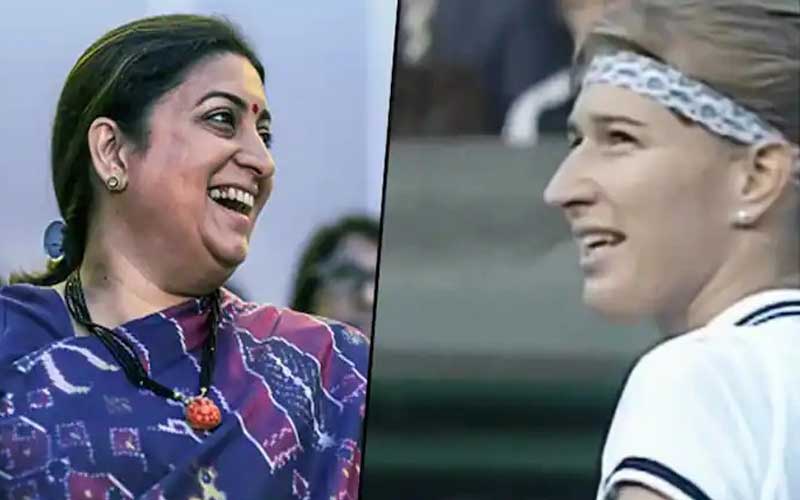 Smriti Irani, the union minister who is well-known for her fondness for memes and the sharing of amusing videos on the internet. She also never skips a chance to remind her fans about her hit programme Kyunki Saas Bhi Kabhi Bahu Thi. This time, she uploaded a video with tennis icon Steffi Graf, which had the internet in stitches.

The clip of a 25-year-old Steffi Graff on-court marriage proposal that she got from a fan has taken the internet by storm, on the tennis legend’s 52nd birthday. So much so, that even the union minister could not help sharing it on her official Instagram handle.

Irani being one among those who reacted on the video, claiming that she, too, was once a tennis enthusiast. She cleverly wrote "Kyunki Bahu Bhi Kabhi Tennis Fan Thi," a parody of her popular television programme "Kyunki Saas Bhi Kabhi Bahu Thi," which was one of India's most popular for years.

A fan from the audience can be heard in the video imploring Steffi to marry him right before she is ready to serve. Steffi grins and then responds with a funny remark. In the video, she can be heard asking, "How much money do you have?" The video has been seen over 2 lakh times. It was first released on the tennis player's 52nd birthday by Wimbledon's official Instagram account.

This blast from the past post delighted a lot of people on the internet. ROFL emojis abound in the comments section. Steffi Graf was also recognised by some people as one of the best tennis players of all time.