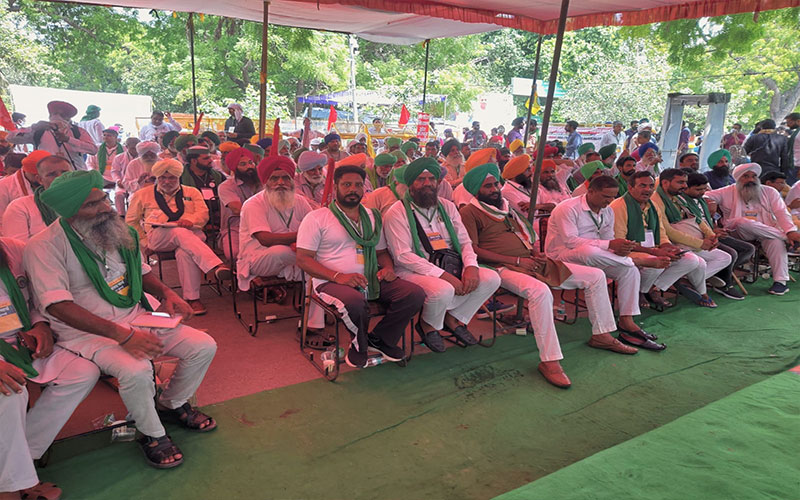 New Delhi : Today, 200 farmers associated with Samyukta Kisan Morcha participated in the Kisan Sansad at Jantar Mantar. As declared earlier, everything was orderly, disciplined and peaceful. Today's proceedings included a question hour, and the debate was centred around APMC Bypass Act, in continuation of yesterday's debate. There was also a resignation of the Agriculture Minister that was announced in the Kisan Sansad today.

The Kisan Sansad passed a unanimous resolution at the end of the two-day debate on APMC Bypass Act. The Resolution takes into account the adverse experience of the operation of the APMC Bypass Act from June 2020 to January 2021 before the Supreme Court suspended the implementation. This includes exploitation and cheating of farmers to the tune of crores of rupees, APMC transactions reducing significantly and large number of mandis suffering massive losses pushing them to the verge of closing down. The resolution stated that "farmers need much higher number of operating mandis and not less mandis". The resolution called for a repeal of the central act immediately referring to the undermining of the constitution and democratic functioning that the legislation was based on. The resolution also asked state governments to bring in improvements in their mandi systems that protect farmer interests.

Over two days of proceedings, protesting farmers have refuted by their actions and participation in the Kisan Sansad debates many false allegations that have been put on them for months now - that they need to be educated about the laws, that they are out to indulge in violence and so on. The Kisan Sansad's two day proceedings exposed the conspiracy of the BJP-RSS forces starkly once again, in maligning farmers.

Inside India's Parliament, the issue of farm laws and farmers' indefinite protest were picked up by many MPs cutting across party lines. There was a protest this morning by several Parliamentarians at Gandhi Statue once again today. The Union Agriculture Minister was again greeted by placards that took messages from the farmers' movement straight to the Parliament and government. Many MPs have already moved multiple adjournment motions in the Parliament, in support of the farmers' movement, and several have been rejected. Feeling cornered from all sides, the Minister for Agriculture has reportedly said that the government is 'willing to have talks with farmers, if they come with a proposal'. The proposal has already been put on the table by farmers months ago. It is time that the Modi government reconciled itself squarely with this simple reality - farmers will not retreat and will not go back home without a full repeal of the 3 black laws, and without securing MSP as a legal guarantee for all farmers. The resolution to the current agitation is only through this, and the Government not recognising this to this day, has been responsible for lives of hundreds of farmers being lost in the agitation.

BJP Minister in Modi Government, Meenakshi Lekhi, made an outright illegal casteist slur in her media remarks yesterday by calling farmers "mawalis". Samyukt Kisan Morcha strongly condemns the insult heaped on farmers - the anna daatas keeping the country alive and sovereign, and the casteist slur. Her token remarks withdrawing the remark is simply unacceptable. She reflected the derogatory and repressive attitude that the BJP government has been showing towards the farmers' movement from the beginning. This is completely unpardonable, said SKM in strong condemnation of the new Minister's attitude towards farmers of the country.

SKM also pointed out that the government desperately continues to malign farmers on every occasion possible. Yesterday, the injury on a media person's body was blamed on violent farmers by BJP spokesperson Gaurav Bhatia, whereas it turns out that it was a spat between two media persons that led to the unfortunate injury! SKM demands that Gaurav Bhatia tender an apology immediately.

In Sirsa, Samyukt Kisan Morcha was again successful in its Satyagraha to get the Haryana administration to retreat from its false and untenable cases on farmers. Five arrested farmers were released on bail, and subsequently, Sardar Baldev Singh Sirsa ended his hunger fast after five days. Hisar, Tohana and Sirsa events showcase very clearly the repeated attempts of Haryana government in trying to foist false cases in the name of sedition, attempt to murder and other serious charges, and the repeated success of the Satyagraha of the Kisan Andolan in disallowing the same.

Samyukt Kisan Morcha notes that the Electricity Amendments Bill 2021 has been listed for Business in this session by the Government. SKM warns the government against any reneging on the commitment already made during the formal talks with farmer representatives.