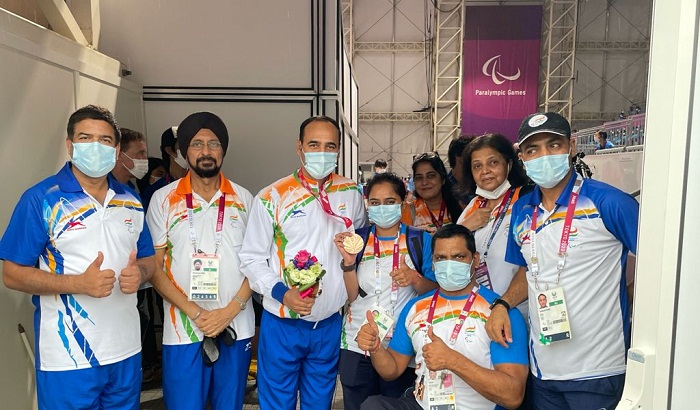 New Delhi: India got another medal in the Shooting events of the Tokyo Paralympic Games 2020. Indian shooter Singhraj Adhana clinched the bronze medal in the P1 men's 10m air pistol SH1 event here on Tuesday. Singhraj shot a total of 216.8 to finish third in the event. He qualified for the eight-man final as the sixth-best shooter at the Asaka Shooting Range in Tokyo.

This was India’s 8th medal in Paralympics 2020, which double the previous best performance of four medals in the Rio 2016 Paralympics. On Monday India had won five medals, including the Gold Medal won by Shooter Avani Lekhara and now, India has bagged 2 Gold, 4 Silver and 2 Bronze medals.

Prime Minister Narendra Modi has congratulated Singhraj Adhana for winning the Bronze Medal in shooting at the Paralympics Games in Tokyo. In a tweet, the Prime Minister said; "Exceptional performance by Singhraj Adhana! India’s talented shooter brings home the coveted Bronze Medal. He has worked tremendously hard and achieved remarkable successes. Congratulations to him and best wishes for the endeavours ahead. #Paralympics #Praise4Para"

Today, Singhraj dropped out of contention with his poor 19th shot but managed to get back in the reckoning with his 20th attempt. Manish Narwal, who topped the qualifications with 575, was eliminated in seventh place.