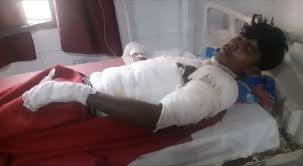 The youth caught on charges of mobile theft set fire to the GRP lockup. By the time the policemen extinguished the fire, his chest and hands were burnt. He has been admitted to the Medical College. While taking prompt action, GRP Pooja Yadav has suspended Inspector-in-charge Ramshay and constable Atmaprakash. IG GRP Satyendra Kumar also reached the police station and took information.

Rahman, a resident of Gadiyana Mohalla of the city, had come to the railway junction on Thursday morning with his wife Chanda. He had to make reservation for brother Guddu living in Mumbai. Nitin, a resident of Neemgaon, Lakhimpur Kheri, was sleeping on the floor near the reservation counter. When he woke up after some time, his mobile was missing from his pants. He informed the GRP about the missing of the mobile.

When the CCTV footage was seen, Rahman was seen being fired. On which GRP immediately caught him near the counter. Mobile was also recovered from him. He was caught and put in jail. Since then he was being questioned. On Friday afternoon, Rehman took out a matchbox from the bag of another prisoner kept in the police station. After that he went to the toilet built in the lock-up and set fire to his clothes kept there.

Hearing her screams, the soldiers reached inside and extinguished the fire. GRP in-charge Inspector Ram Sahai said that incidents of mobile theft were continuously coming to the fore at the station. That's why Rahman was stopped for questioning. SP GRP Pooja Yadav is also reaching the police station.