Shah Rukh had talked about his parents on David Letterman's talk show also, which is streaming on Netflix now. He says in this interview that he tries to be with his children so that they don’t feel the loss of parents like he did. 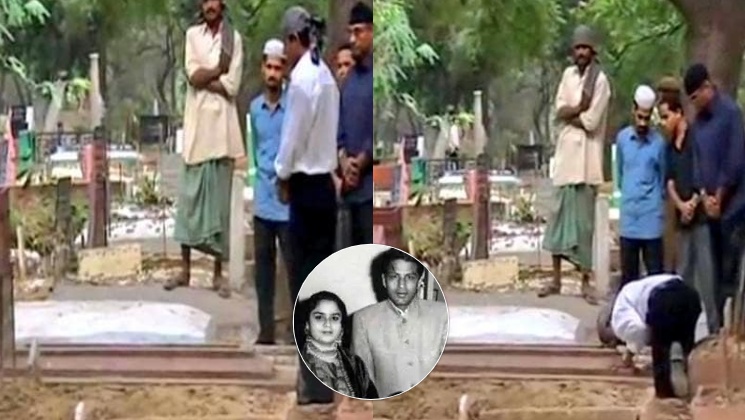 Shah Rukh Khan visited his parents’ grave in Delhi today. He paid tribute while onlookers reportedly witnessed tears rolling down his eyes. The old photos are viral in the media today that has his young parents’ and some shots of his early visits to the graves.

His father, Taj Mohammed Khan, died of cancer when the he was just 15 years old. He lost his mother Lateef Fatima Khan after a prolonged illness in 1990.

When his mother was admitted at AIIMS – All India Institute of Medical Sciences – he used to wait in the parking in his Maruti Car.

“I used to just pray and pray that she comes back home fit and fine, as someone had told me if you keep on praying, she would be fine, and that prayers have the power to bring back the souls and bring to life, a dying person. So my hope would keep me on.” He had said this in an interview about his mother.

His sister Lala Rukh was my senior in Aligarh Muslim University in late 80s and early 90s. A non-distinct girl, she was never boasting of her brother being a part of films in the making. She was, however, loved for the distinct name she had. I don’t know if she knows this till date.

Khan is regular to his parent’s grave whenever he makes a trip here. This student of Jamia Millia Islamia’s Mass Communication Department, calls Delhi his second home and was the first one to say that Delhi should have a film city too in an interview to me early 2000.

Having lost his parents before he matured, Khan has those empty space that he attempts to fill by being present for his children and has often been seen immensely possessive of them, especially in a crowd. He even once raised his hand, on a fan in a stadium where he felt they were misbehaving with his teenage daughter. “But the kids told me, ‘you over-reacted Dad. You should be cool’. I was told by them after I reached home that day. I was surprised as I was fighting for them. But children teach lessons well in humility and behaviour. I said, fine. And I actually started behaving more cool when with them in public,” he has been saying it in different documented chats.

Shah Rukh had talked about his parents on David Letterman's talk show also, which is streaming on Netflix now. He says in this interview that he tries to be with his children so that they don’t feel the loss of parents like he did.