So far 10 people have been evacuated from the hotel who have been taken to Gandhi Hospital and Yashoda Hospital. According to the police, 5 of these people have got serious burns, their condition remains very serious. 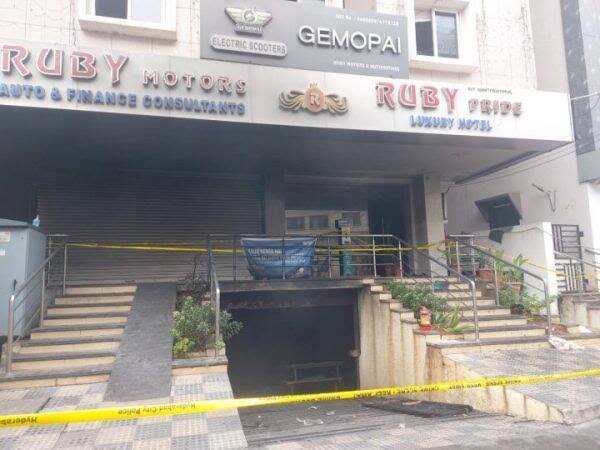 Eight people died in a major fire in Secunderabad, adjacent to Hyderabad, while more than a dozen people were injured. Prime Minister Narendra Modi has expressed grief over the incident. Announcing the compensation, he said that the next of kin of the deceased would be given Rs 2 lakh and the injured would be given Rs 50,000. According to the information, the fire started in an electric bike showroom. The fire that broke out on the ground floor of the four-storey building slowly engulfed the entire building. The electric bike is in the showroom on the ground floor and the flames started rising from there.

The smoke of the fire spread to the upper floors and many people lost their lives due to suffocation. Dozens of people are badly injured after the accident, whose treatment is going on. According to the information, the fire started at around 9 pm, but by the time people were evacuated, the entire building was filled with smoke, due to which people suffocated. People also tried to jump from the window to escape.

Along with Secunderabad, fire brigade vehicles from Hyderabad also reached the spot and efforts were made to control the fire. The bike showroom is at the bottom and the hotel is on the top floor of the building. It is said that the people staying in the hotel became the victims of this fire. The fire has been brought under control in the early hours of today but the search work is going on in the building. So far 10 people have been evacuated from the hotel who have been taken to Gandhi Hospital and Yashoda Hospital. According to the police, 5 of these people have got serious burns, their condition remains very serious.

Prime Minister Narendra Modi has expressed grief over the incident. He has announced compensation. The PMO tweeted and said- 'Saddened by the loss of lives due to fire in Secunderabad, Telangana. Condolences to the bereaved families. Get the injured well soon. Rs 2 lakh will be given to the next of kin of each deceased from PMNRF and Rs 50,000 will be given to the injured.