Jammu's daughter Sargam Kaushal winning the title of Mrs. World 2022 was a proud moment for the country. If there is an atmosphere of happiness in the family, Jammu and Kashmir is feeling proud. 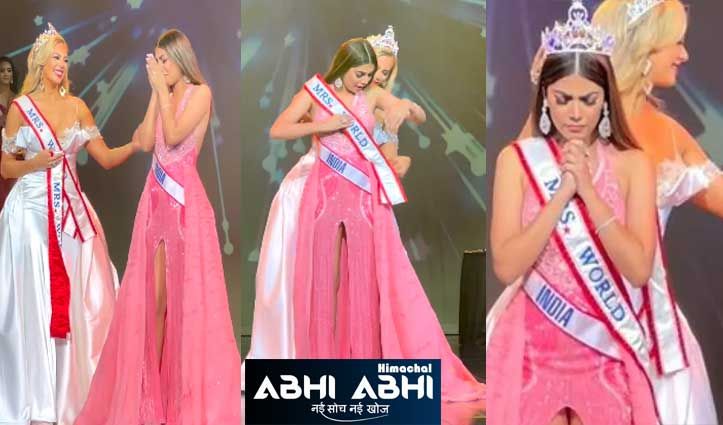 Jammu's daughter Sargam Kaushal winning the title of Mrs. World 2022 was a proud moment for the country. If there is an atmosphere of happiness in the family, Jammu and Kashmir is feeling proud. Tears of joy are welling up in the eyes of the parents on the achievement of the daughter. There is an influx of congratulators at Sargam's house in Jammu's Bahu Fort.

She is a teacher by profession, Sargam's father GS Kaushal, who has been the Chief Manager in Bank of India, said that Sargam's hard work has paid off. Sargam has special interest in the field of education. She wants that the old respect of teachers should return. She is in America currently. Daughter is planning to come to Jammu in January. Her husband is in the Navy. His duty is in Mumbai.

#SargamKaushal represented India and was elected Mrs. World in Las Vegas on December 18, 2022. Mrs Kaushal defeated competitors from 63 nations to reclaim the crown for India after 21 years. pic.twitter.com/4JEUncaATS

Sargam Kaushal was married in 2018. After marriage, she was determined to win the beauty pageant. After this she came to Mumbai and started modeling and participated in many competitions. She has also participated in Mrs India. He said that the daughter has won this title with passion. This victory has proved that if the flight of dreams is high then every difficulty seems easy.

The people of Jammu are also very happy with the title Sargam has gotten. Youth Rajesh Kumar said that Sargam has brought laurels to Jammu in the country and the world. She proved that the people of Jammu get a platform here too, they have the ability to prove their talent. Sargam Kaushal did his higher secondary education from Presentation Convent. She did her graduation from Women's College Gandhinagar and did her Masters degree, B.Ed from Jammu University.