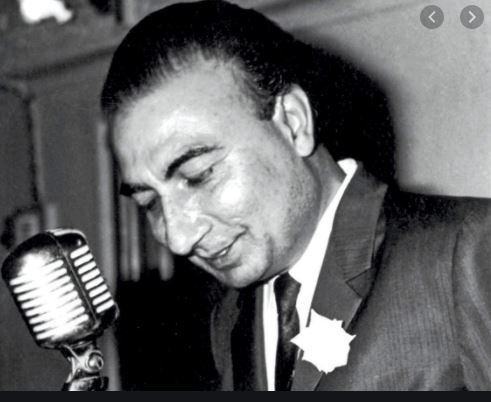 The nation is celebrating Sahir Ludhiyanvi’s 100th birth anniversary today, amid corona-induced chaos and confusions about the existence of life. For Sahir takes them to a world which is full of romance, and yet jolts to a truth – that there is no religion but humanity.

The poet who became popular more for his songs in Hindi films than his better poetry gave us some of the best Hindi film songs – “Main Zindagi ka sath nibhata chala gaya” , Abhi na jao chor kar” from Hum tum starring Dev anand and Sadhna, songs of film kabhi Kabhie and Taj Mahal were among his best.

He had received a Padma Shri in 1971 and even a commutative stamp was issued in his honour in 2013.

The filmfare awardee for best lyricist for Taj Mahal in 1963 and second Filmfare for Kabhie Kabhie in 1976, further established him as a poet of the commons with strength of pain and unfulfilled love in his poetry.

Sahir's full name was Abdul Hayee. Born in 1921 Sahir left the world in 1980, shocking the world as he died in his sleep. But he was famous as Sahir Ludhiyanvi, being from the city, that he used the city's name as his pet name or takkhalus all his life.

Sahir’s life was full of painful memories from his father’s side. His love life was forever unfulfilled, he was a ladies’ favourite with his looks and signature style cigar he carried, but a very silent man of severe thoughts.  He started writing from the age of 11. Sahir was in Lahore in 1943. Where he wrote his most popular book Talkhiyan in 1945. After Partition of India, Sahir went to Pakistan. He joined Progressive Writers’ Group and that’s what changed his ideas about life and he often made controversial statements which landed him in trouble.

After he promoted communism, Government of Pakistan issued a warrant against him and he ran away from there, came to Delhi and finally settled in Mumbai. That was two years after Partition, in 1949. There he built a bunglow which he named Parchaiyyan (shadows) where he lived and died.

Forever literature magazine publishers’ favourite like Adab-e-Lateef, Savera and Pritlahri, Sahir made huge name in the Hindi film industry with songs that are still sung especially “Vo subah kabhi to aayegi” in the context of a desire to be free from a bad country leadership and management, even now.

This writer of five books Sahir was also known for his relationship with Punjabi author and famous poet Amrita Pritam which he never talked about directly in his works. But those who know him, believe he composed his love poetry for her. Forever a non-conformist, Amrita was vocal about her love for him though, after she separated from her husband.