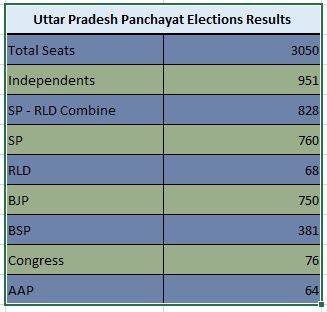 The election results of just concluded state-wide Panchayat elections in Uttar Pradesh show a grim picture for Bhartiya Janata Party. These elections were conducted in all the 75 districts of the state. In total there were 3050 seats which were up for grabs.

As a group the Independents came as the biggest set of winners bagging 951 seats, closely followed by 828 seats won by Samajwadi Party – Rashtriya Lok Dal combine. In this combine apart from the 68 seats of RLD – Samajwadi Party took the lion’s share of 760 seats, becoming the party with the single largest number of winners.

Some important districts and the number of seats won by BJP are as follows: BJP won only 8 of the total 40 seats in Varanasi (Prime Minister Modi’s constituency); In Gorakhpur (Yogi Adityanath’s constituency) it won 28 out of the total 68 seats; in Ayodhya where it is building a majestic Ram Temple (also a lion’s share of the state budget was allocated to this town) they won a paltry 6 out of the total 40 seats; 8 again in Mathura’s 33 seats and 14 only from the 84 in Prayagraj.

The ruling BJP, not even a year away from the State Assembly elections came a lowly third. But with 750 seats it is still a force to reckon with. But the bad news is that the lackadaisical approach to Covid preparedness of the Central Government and the State’s dismal performance in helping share Oxygen supply with its citizens or the pathetic state of healthcare system or the continuously burning funeral pyres or the long waiting list to hospitals happened after these Elections concluded. This surely will dip the hearts of even the staunchest supporters of the Hindu-appeasing party.

The verdict also does not include backlash because of the Central Governments support to the Kumbh celebrations in Haridwar where an estimated 91 lakhs pilgrims took the customary dip in the Ganges without any Covid responsible social distancing. Dubbed the single largest Covid super spreader in the history of the pandemic by many doctors and global health experts, there was no usage of PPE kits, Masks or Gloves when these religious travellers, most of whom were from Uttar Pradesh, took the symbolic ablutions in Uttrakhand. It should worry the ruling party that when the citizens of this state will take the next Assembly elections as a referendum to these mistakes – would it still remain in power?

The counting took 3 days to be complete and this counting was post Supreme Court intervention.

Many experts are now of the opinion that since there were an abnormally high number of Independents who won – the bigger parties will try to woo them to join their alliance. These Independents, most experts felt, will be subjected to Income Tax, CBI, ED raids first and later given assurance of plum position in the organisation or will be offered big money by the biggest party which has the complete wherewithal to action such wrong doings.