According to Reuters, Djordje said, “Ronaldo was agitated, he threw the armband, it fell right next to me.” He further talked about his crew’s decision about the armband, “The entire crew agreed this will go for Gavrilo.” 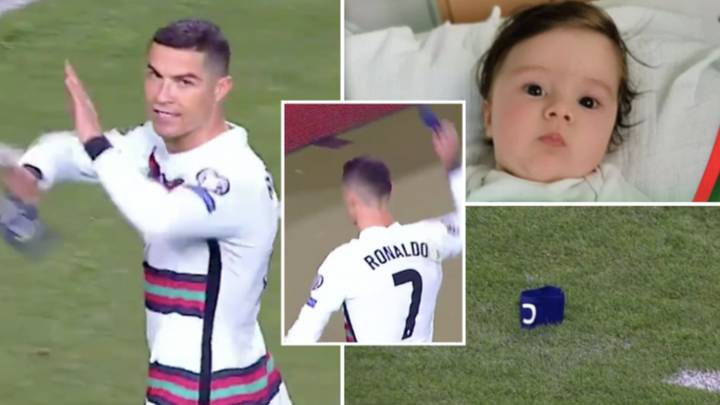 Last Saturday, during the World Cup 2022 qualifiers Cristiano Ronaldo was denied a goal which could have proven to be Portugal’s winning goal against their Serbian opponents. Ronaldo was not very pleased with the decision of the match officials and he did not shy away in expressing his anger. He walked off the football pitch throwing away his Captain’s arm band on the ground.

The whole spectacle was entertaining for football fans but what followed these events is even more interesting and heart-warming.

Ronaldo’s armband fell near Djordje Vukicevic, a Serbian firefighter who was working at the Rajko Mitic stadium picked it up. Djordje decided along with his group that the armband should be auctioned off for the treatment and life-saving surgery of a six-month-old toddler, Gavrilo Djurdjevic who is suffering from spinal atrophy.

According to Reuters, Djordje said, “Ronaldo was agitated, he threw the armband, it fell right next to me.” He further talked about his crew’s decision about the armband, “The entire crew agreed this will go for Gavrilo.”

Baby Gavrilo’s family had thus far received donations of about $587,900 and with the sale of Cristiano’s infamous captain armband they could add much more to their grand total.

The mother of the toddler told media, “We could not believe that some people who do not even know us… would take the armband, auction it and help our child.”

Mozzart, a Serbian sports betting and gaming company took upon themselves to buy the armband picked by the Serbian firefighter for a grand sum of $75,150 at a charity auction.

The company released a statement, “We decided to take part in the auction because of its humanitarian nature. The objective was to aid toddler Gavrilo Djurdjevic as well as raise awareness that we need to stand united in taking this kind of action.”