As per the latest developments and investigation, Morbi's suspension bridge accident happened because of its new flooring. 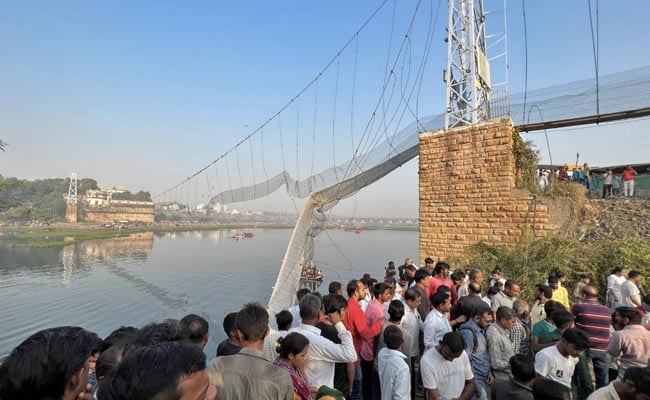 Morbi's suspension bridge accident happened because of its new flooring. In the name of renovation, the wooden base of the bridge was replaced with four layers of aluminum sheets. This greatly increased the weight of the bridge. The old cables could not handle this load as the congestion increased and the bridge collapsed. Gujarat Police has given this information by filing an affidavit in court.

On the evening of October 30 in Morbi, the police arrested nine people in connection with the collapse of the suspension bridge. They were produced in the magisterial court in Morbi on Tuesday. In the affidavit submitted by the police to the court seeking the remand of all the accused, the weight of the bridge has been cited as the reason for its fall. So far 135 deaths have been confirmed in this incident.

The Gujarat Police on Tuesday filed a forensic report of the bridge accident in the magisterial court. This report is submitted in a sealed cover. Public prosecutor Panchal told after the hearing that it is clearly written in the remand application presented by the police that during the repair work was not done on the strength of the bridge structure. Only the wood was removed from the bridge's flooring and aluminum sheets were installed.

Public prosecutor Panchal said that during the investigation of the Forensic Science Lab, it has been found that the four cables on which the bridge rests were not replaced during six months of repairs. According to forensic experts, the very old cables could not bear the weight of the people including the new flooring and the cables were broken due to excessive weight.