Reliance announces JioPhone Next - an inexpensive smartphone, in collaboration with Google

The smartphone, branded JioPhone Next, is said to support the complete suite of Google and Jio apps, and also the Google Play Store, which provides access to additional Android apps, according to the companies. 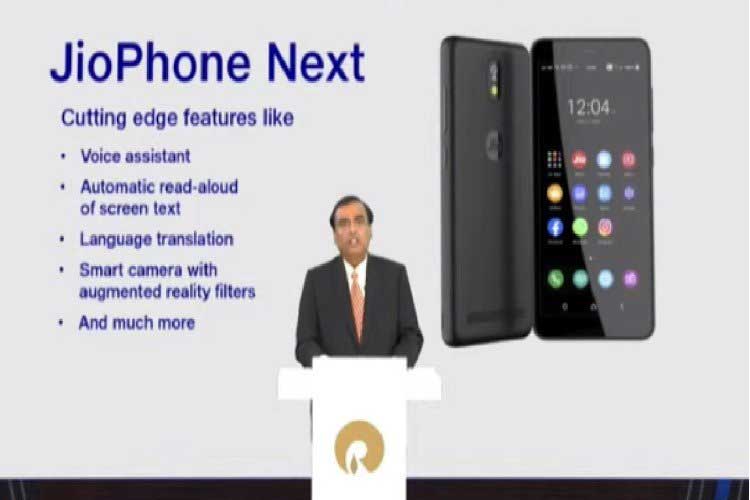 Chairman Mukesh Ambani of the Reliance Industries disclosed the introduction of a smartphone under its Jio Platforms subsidiary during the 44th Annual General Meeting (AGM) that took place live on Thursday.

The new Android smartphone is the product of Reliance Jio and Google's collaboration, which was announced last year and disclosed by Mukesh Ambani and Google CEO Sundar Pichai. To appeal to the people, it provides an optimised Android experience on entry-level hardware.

The smartphone, branded JioPhone Next, is said to support the complete suite of Google and Jio apps, and also the Google Play Store, which provides access to additional Android apps, according to the companies.

The JioPhone Next is part of Google's Rs. 75000 crore investment in Jio Platforms Pvt. Limited it made last year, with the goal of converting the country's massive feature phone user base to smartphone consumers.

While several aspects of the forthcoming phone have been revealed, including its Ganesh Chaturthi launch date of September 10th, however the phone's pricing has yet to be released, other than the fact that it would be "the most affordable smartphone not only in India, but globally."

The rationale for such a phone, according to Reliance, is because there are still 300 million people on 2G, and they want an "extremely affordable" option to liberate the country from the outdated connectivity standard.

The JioPhone Next is a smartphone aimed for those seeking to upgrade from 2G to 4G while staying within their budget. The new service is based on a modified Android operating system created by Google particularly for Jio.

Ambani at the AGM said, "This is a testimony to a global technology giant, and a national technology champion, working together to make truly a breakthrough product that can be first introduced in India, and then taken to the rest of the world."