Security has been increased around the camp where Ram Rahim is staying in Baghpat and no one is being allowed inside the camp. According to Inspector DK Tyagi of Uttar Pradesh Police, tight security arrangements have been made around Barnawa Dera. 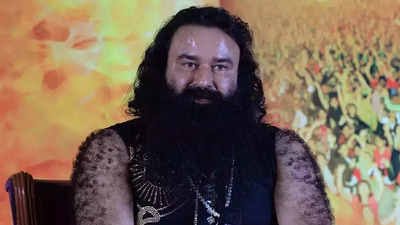 Dera Sacha Sauda chief Gurmeet Ram Rahim has once again got parole. Gurmeet Ram Rahim, lodged in Rohtak's Sunaria Jail, has been granted parole for one month by the Jail Department. During this period of one month, Ram Rahim will stay at Baghpat Ashram in UP. Ram Rahim was taken out of the jail on Friday morning amidst heavy security and Sunaria had reached Honeypreet to pick him up from the jail.

Gurmeet Ram Rahim is serving his sentence for the sexual abuse of two sadhvis and the murder of journalist Ramchandra Chhatrapati. Ram Rahim has been sent out on parole from Sunaria jail at 6.30 am. It is being said that after leaving the jail, Ram Rahim has gone to the camp of Baghpat in Uttar Pradesh. On the other hand, Gurmeet Ram Rahim was given parole for 21 days even earlier.

To pick up Ram Rahim from jail, his cousin Charanjit and his daughter Honeypreet Sunaria had reached the jail. After which Gurmeet Ram Rahim went to Baghpat from jail along with him. After the release of Ram Rahim from jail, Gurmeet has been taken to Baghpat amid tight security. However, the jail administration has only granted one month parole to Ram Rahim. At the same time, the Uttar Pradesh Police has given NOC to the court regarding the security of Ram Rahim. Due to which Ram Rahim has been given parole on the condition that he will have to stay in UP.