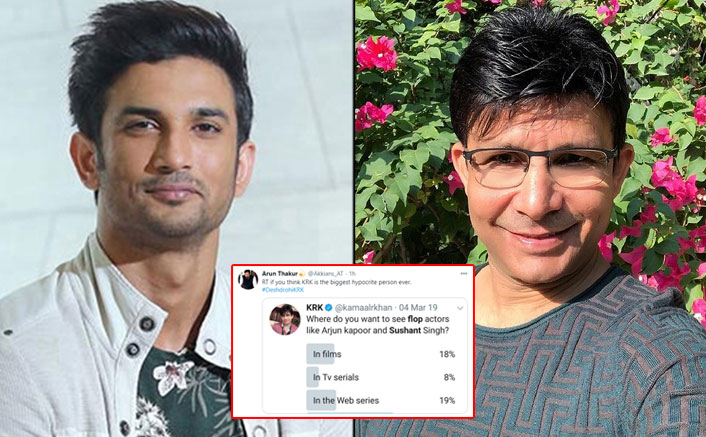 Film critic KRK has said that Ranveer Singh has been cursed by the late actor Sushant Singh Rajput. KRK says that Ranveer Singh's films are proving to be back-to-back disasters, this is because he made his career by working in films that Sushant got at one point in time.

According to KRK, Sushant Singh Rajput was the first to be cast in the film 'Goliyon Ki Rasleela Aur Ramleela', he was also the first choice of director Sanjay Leela Bhansali but he could not do the film due to his agreement with Yash Raj Films. KRK says that if Sushant had gotten Ramlila, then the stardom that Ranveer got, Sushant would have got.

Kamal Rashid Khan aka KRK keeps on targeting film stars on many occasions. After Shah Rukh, Salman, and Akshay Kumar, he is now after Ranveer Singh. In a recent video, he said that after the death of Sushant, almost all films Ranveer Singh flopped. Whatever is happening with Ranveer today is all Karma.

Ranveer Singh got famous overnight from the films Goliyon Ki Rasleela and Ramleela. After this film, he got films like Bajirao Mastani and Padmavat. Ranveer reached the pinnacle of success only after these two films. After these films, the pairing of Ranveer and Deepika also became a hit.

When Goliyon Ki Raasleela Ramleela was about to be made, there were reports in the media that Sanjay Leela Bhansali, the director of the film, wanted to cast Sushant Singh Rajput, but due to Aditya Chopra's agreement with Yash Raj Films, he could not do the film. Later Sanjay Leela Bhansali cast Ranveer Singh under compulsion.