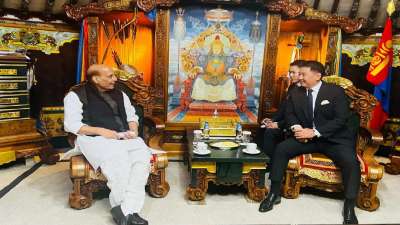 Defense Minister Rajnath Singh met President of Mongolia U.K. Khurelsukh on Tuesday and discussed ways to further deepen the multi-faceted strategic ties between the two countries. Rajnath is on his five-day visit to Mongolia and Japan from Monday. The visit is aimed at expanding India's strategic and defense ties with the two countries amid the regional security situation and turmoil in global geopolitics. Singh will be on a visit to Mongolia from September 5 to 7. This will be the first visit by an Indian Defense Minister to this East Asian country.

Singh tweeted, "President of Mongolia S. E. U. Mongolian President Yu. It was a wonderful meeting with Khuralsukh in Ulaanbaatar. When he met with him in 2018, he was the Prime Minister of the country. We are fully committed to further deepen our multi-faceted strategic partnership with Mongolia. It was a pleasure interacting with Jandanshatar. I appreciate their continued support in promoting and expanding our shared heritage of Buddhism."