Rain wipes off the opening session of India vs. New Zealand WTC final in Southampton, prompting fans to lash out at ICC

When the BCCI stated that the first session of the WTC final had been rained off owing to rain in Southampton, supporters rushed to Twitter to express their displeasure with the ICC's schedule. Here's how Twitter users reacted. 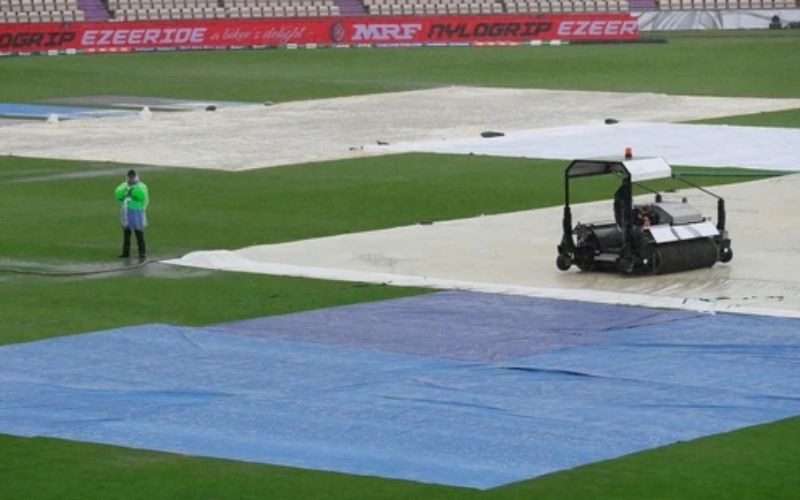 After the first session of Day 1 at the Rose Bowl in Southampton on Friday was wiped out owing to rain, fans slammed the International Cricket Council (ICC) for scheduling the maiden World Test Championship (WTC) final between India and New Zealand in England.

The match was set to start at 3:30 IST, with the toss taking place at 3 pm, however, the decision to postpone play until at least lunch on the first day of the WTC final was decided approximately an hour before the toss.

BCCI tweeted: "Update: Unfortunately, there will be no play on Day 1 of the ICC World Test Championship final. #WTC21 (sic)." It had been pouring in Southampton since Thursday evening, and the situation was no different on Friday. The rain was also fairly heavy at points.

At the time of writing, live images from the Ageas Bowl Southampton did not look good. Almost the whole 30-yard circle was coated in many layers, there were numerous patches and tiny puddles visible throughout the ground, and the worst thing was that it was raining.

When the BCCI stated that the first session of the WTC final had been rained off owing to rain in Southampton, supporters rushed to Twitter to express their displeasure with the ICC's schedule.

Previously, India's spin star R. Ashwin tweeted a photo of the Ageas Bowl as it continued to rain. "Camera also has a raincoat," Ashwin said on Instagram while uploading a video of the ground. Prithi Narayanan, his wife, also rushed to Twitter to post a video of the ground and wrote, "Pouring down #WTCFinal."

Rain is expected on all five days of the tournament, therefore the ICC has added a reserve day on June 23, but if there is no result, the Test Championship will be shared.

the ICC announcement on the playing circumstances stated, "The Reserve Day has been set to provide five full days of play and will be utilised only if lost playing time cannot be recovered under the regular arrangements of making up lost time each day. If a positive outcome is not obtained after five complete days of play, the match will be ruled a draw."