The ED had also questioned the Congress president for two hours on Thursday in a money laundering case related to the National Herald newspaper. 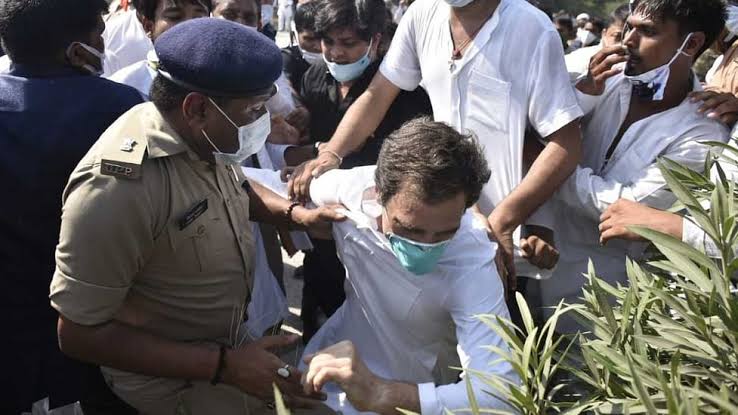 Congress leader and MP Rahul Gandhi has been taken into custody by Delhi Police. He has been detained from Vijay Chowk in Delhi. Significantly, today the ED is interrogating Congress interim president Sonia Gandhi for the second round, due to which Congress leaders are on the streets and protesting. Earlier in Delhi, Congress MPs took out a march from the Parliament premises towards Vijay Chowk in protest against the ED's questioning. Party leader Rahul Gandhi also joined this march. Meanwhile, Delhi Police also detained Congress MPs who were marching.

On being detained, Rahul Gandhi has targeted the Modi government by tweeting. He said that even if we are arrested, you will not be able to silence us. Truth will end this dictatorship. Earlier, before being detained at Vijay Chowk in Delhi, Congress MP Rahul Gandhi said that all Congress MPs have come here. He talked about inflation and unemployment. Police is not allowing us to sit here. Discussion is not allowed inside Parliament and here they are arresting us.

The ED is also questioning Congress interim president Sonia Gandhi on Tuesday. These inquiries are being done in the 'National Herald' case. Today Sonia is being questioned for the second round, due to which the Congress is protesting inside and outside the Parliament. In this regard, a meeting of Congress general secretaries, party's state in-charges and MPs was held at the party headquarters on Monday evening, in which the strategy for the protest was prepared.

In protest against this, the Congress had demonstrated power across the country and the party leaders had given arrest. Earlier, the ED had summoned Sonia on Monday, but later this date was extended by a day.