Rahul becomes King Of Lord’s With Unbeaten Century,  India Shines On Day One Of the Second Test

opener K L Rahul's  brilliant century ( batting 127) and solid contribution in two-century partnerships with Rohit Sharma and Virat Kohli, helped India to pile up 276 runs for the loss of three wickets, on the first day, in the first innings of the second cricket Test match 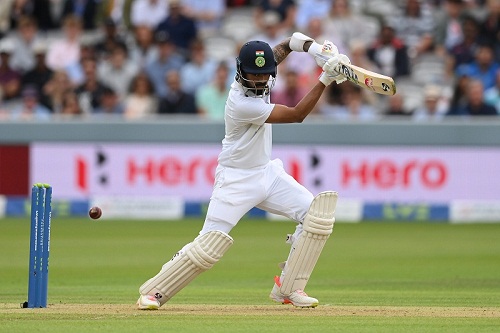 London: Brilliant Unbeaten Century by opener K L Rahul and his solid contribution in two-century partnerships with Rohit Sharma and Virat Kohli, helped India to pile up 276 runs for the loss of three wickets, on the first day, in the first innings of the second cricket Test match at Lord's. At stumps, K L Rahul ( batting 127) and Ajinkya Rahane ( batting 1) were at the crease.

England captain Joe Root on Thursday morning won the toss and decided to field first, his decision to put India in to bat was proved wrong as Rahul and Rohit Sharma added 126 runs for the first wicket. This is India’s first-century partnership, by the openers, outside Asia since 2010. Rahul still holding the fort with 127off 248 balls, hit 12 boundaries and one six. Rohit got out when he was on 83, faced 145 balls and hit 11 fours and 1 six. Lord’s pitch was looking good for batting, but Cheteshwar Pujara could not change his fortunes, as he got out for 9 runs. James Anderson got both the wickets, first he bowled Rohit and forced Pujara to give an edge into the hands of Bairstow in the third slip.. After that came in captain Virat Kohli, who batted with the intention to build another good partnership with Rahul both taken the score from 2/150 to 267 but at this, Robinson forced Virat to give an edge on a ball that was going far from the stumps and Joe Root made no mistake in taking the catch at the slip. Rahul and Virat contributed 117 runs for the 3rd wicket. Brief Score: India First Innings : 3/ 276 in 90 Overs ( K L Rahul batting 127, Ajinkya Rahane batting 1, Rohit Sharma 83, Virat Kohli 42, James Anderson 2/ 52. Robinson 1/ 47).