Putin claims that US aircraft involved in Black Sea Incident

During last week's Black Sea incident, a US reconnaissance aircraft was working in sync with a British destroyer, according to Russian President Vladimir Putin, in what he termed as a "provocation" to test Moscow's response. 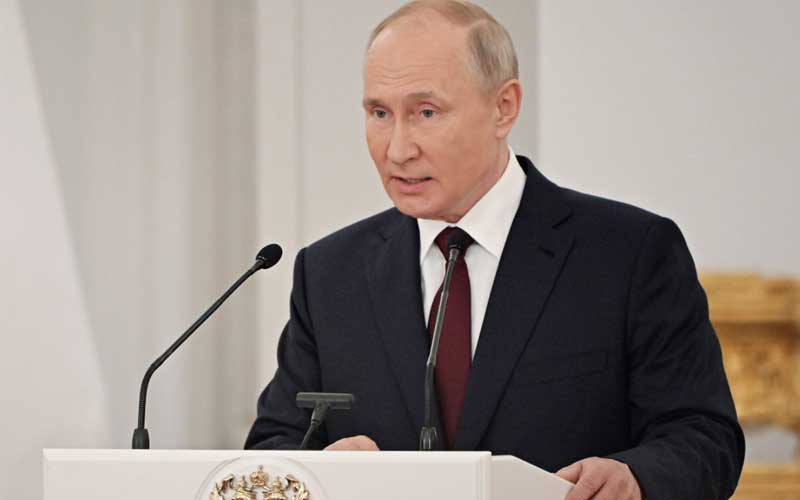 On June 23, Moscow said that one of its warships fired warning shots and a warplane dropped bombs in the course of the British destroyer Defender in a location near the Crimean Peninsula, which Russia annexed in 2014. Britain refuted the claim, claiming that its ship was not shot at and that it was sailing in Ukrainian waters.

When asked if the event could have sparked World War III, Putin stated that even if Russia had sunk the British cruiser, it was unlikely since Western nations realised they couldn't win a global struggle.

Putin stated the apparent goal of the US aircraft was to watch the Russian military's response to the British destroyer during a live call-in broadcast. He went on to say that Moscow was aware of the US intentions and had responded appropriately to avoid disclosing sensitive information.

Britain claimed the Defender was on a routine route via an internationally recognised transit lane and remained in Ukrainian waters near Crimea during the incident on Wednesday. Despite Russia's 2014 annexation of Crimea, the United Kingdom, like the rest of the world, regards the peninsula as part of Ukraine.

In response to a question regarding Russia's tug-of-war with Ukraine, Putin reaffirmed his long-held claim of the close kinship between the Russian and Ukrainian peoples but accused the Ukrainian leadership of remaining unfriendly to Russia.

The Russian president spoke about internal matters for the majority of the marathon call-in show. He expressed optimism that the country will be able to avoid a statewide lockdown due to an outbreak of new illnesses. Putin stated that decisions by local governments in several regions to require immunisation for some workers could help contain the fresh wave of infections and avert a lockdown.

“Our colleagues' activities in specific locations are aimed at averting the necessity for a lockdown when entire enterprises shut down and people are left without employment and salaries,” Putin stated.

The Russian president said he didn't consult his physicians about it but instead looked at what his friends had done and chose Sputnik V since it offered the best protection against the virus.

He went on to say that he didn't specify the vaccine he took at first because he didn't want to give the vaccine's maker an advantage. Sputnik V received regulatory approval in Russia in August, even though the shot had only been tested on a few dozen people at the time. Large-scale testing has shown it to be safe, with a 91 percent efficiency rate against the virus, according to a paper published this year in the respected British medical journal The Lancet.

In recent weeks, Russia has struggled to cope with an increase in infections and deaths, which has coincided with poor immunisation rates. The number of deaths caused by the coronavirus in Russia reached a new daily high on Wednesday, with 669 new cases reported. Since last Thursday, Russia has seen around 20,000 new coronavirus cases and roughly 600 deaths every day. On Wednesday, there were 21,042 new infections.

The rise, which began in early June, is being blamed on Russians' slack attitude toward taking necessary precautions, the increasing incidence of more virulent varieties, and low vaccination uptake, which experts ascribe to widespread vaccine hesitancy and inadequate production capacity.

Even though Russia was one of the first countries to disclose and distribute a coronavirus vaccination, only about 15% of the population has gotten at least one dose. More than 5.5 million verified coronavirus cases and 135,214 deaths have been documented by Russia's coronavirus task force during the epidemic.

In response to the outbreak, nearly 20 Russian regions, ranging from Moscow and St. Petersburg to the far-eastern region of Sakhalin, have made vaccinations mandatory for employees in certain sectors, including government offices, retail, health care, education, restaurants, and other services, beginning this month. The move has aided in the acceleration of immunizations.

While reiterating his opinion that vaccination should be optional, Putin stressed that local government actions were made by the law and were required to avoid harsher penalties.

Even after being inoculated, some people become sick with COVID -19, according to Putin, but the disease has a milder course.

Along with his yearly marathon press conference, Putin's meticulously scripted call-in shows are meant to portray him as a strong leader who is concerned about people's everyday needs and responsive to their issues. The majority of the inquiries concerned the epidemic, social payments, rising consumer costs, and other domestic concerns. More than 2 million inquiries were submitted to the show's hotline in total.