Protests erupted last week as former South African President Jacob Zuma, 79, turned himself in to authorities to serve a 15-month jail term for contempt of court. 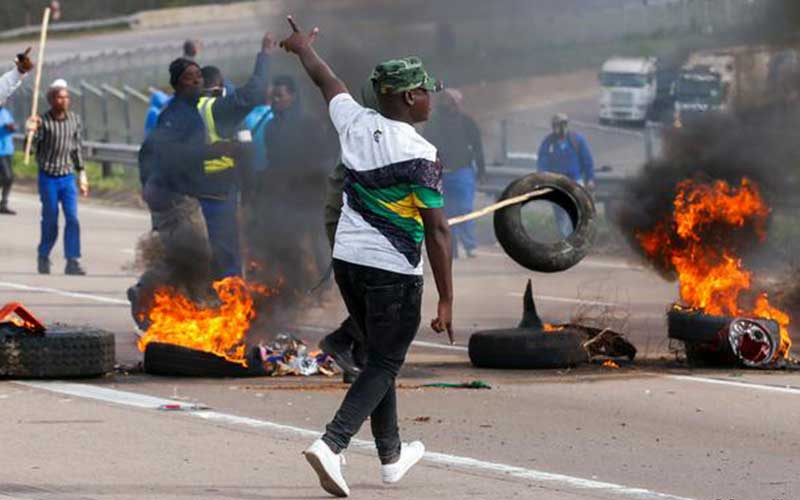 For a week, protesters and looters have vandalized public property, set malls ablaze and clashed with police, who have fired back with rubber bullets and are now so overwhelmed that the military has been brought in to back them up. Nearly 72 people have been killed as looting and arson continue.

Protests erupted last week as former South African President Jacob Zuma, 79, turned himself in to authorities to serve a 15-month jail term for contempt of court. He had refused to appear at an anti-corruption commission to face several allegations, including bribery and fraud, which he has repeatedly denied.

Soldiers patrolled the streets of Johannesburg in armored personnel carriers Tuesday, holding rifles with live ammunition as the military worked to gain some sense of order following the violence.

Nearly 757 people have been arrested by the police. South African Police Minister Bheki Cele vowed to curb the continuing violence that erupted over the weekend.

"We cannot allow anyone to make a mockery of our democratic state and we have instructed the law enforcement agencies to double their efforts to stop violence and to increase deployment on the ground," he said, pleading for peaceful demonstrations.

He added that "No amount of unhappiness from our people gives them right to loot, vandalize and break the law."

President Cyril Ramaphosa addressed the nation to call for calm and announced the military would be deployed in the impacted provinces. He said "opportunistic" criminal elements had taken over protests.

He also warned continued protests and looting could further undermine the nation's Covid-19 response and vaccination rollout, with several vaccine sites forced to stop administering doses over the violence. Doctors have described their system as gone beyond its breaking point with insufficient hospital beds and barely enough oxygen.

Zuma, who served as president between 2009-18 and a key figure of the country's liberation movement, is accused of corruption involving three businessmen close to him brothers Atul, Ajay and Rajesh Gupta and allowing them to influence government policy, including the hiring and firing of ministers to align with the family's business interests.