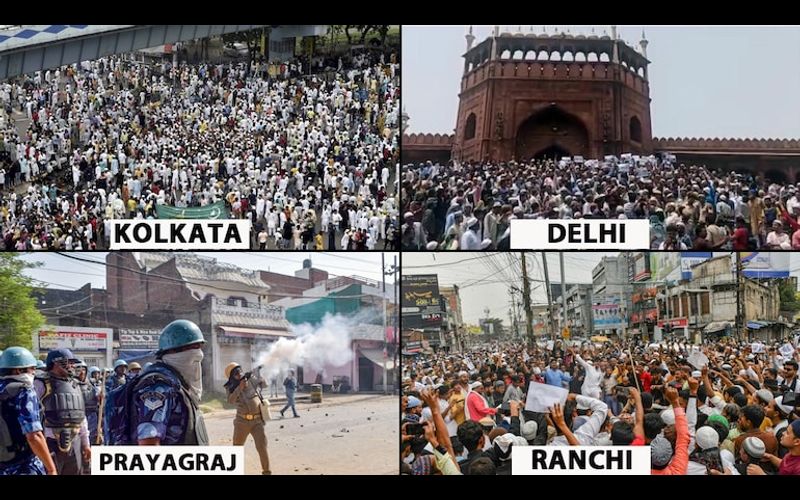 Across several states in India, violent protests erupted over remarks made by now suspended BJP spokesperson Nupur Sharma on Prophet Muhammad. The protestors carried out demonstrations in Delhi, Uttar Pradesh, Telangana, West Bengal, and Jharkhand after Friday prayers. The protestors carried placards demanding Nupur Sharma's arrest and also burnt effigies of the BJP leader. From some regions, sources revealed the incidences of stone pelting between protestors and Police.

In West Bengal’s Uluberia in the Howrah District, a BJP office was vandalized and torched earlier today. The protests erupted in the district earlier today against the controversial remarks of suspended BJP spokesperson Nupur Sharma.

In Jharkhand’s Ranchi, a curfew had to be imposed after a protest against the former BJP’s Spokesperson turned viral. Vehicles were torched and vandalized and stone-pelting also occurred. Injuries were also reported from the protest.

In Uttar Pradesh's Prayagraj too, hooligans invoked a protest against the inflammatory remarks, on which the Chief Minister of Uttar Pradesh Yogi Adityanath ordered strict action against 'hooligans'.

Noopur Sharma has been alleged of using derogatory remarks on the Prophet during a debate on national television, which eventually triggered a diplomatic row with a number of Muslim nations, including Iran, Saudi Arabia, and UAE.