The farmers' agitation, which started against the three agricultural laws, has been going on for the last seven months. Even though so many days have passed since the beginning of the movement, the enthusiasm of the farmers for their demands has not diminished at all. They are still adamant about the demand for the withdrawal of all three laws. Today we are telling you what is the condition of the farmer's movement after the completion of seven months. 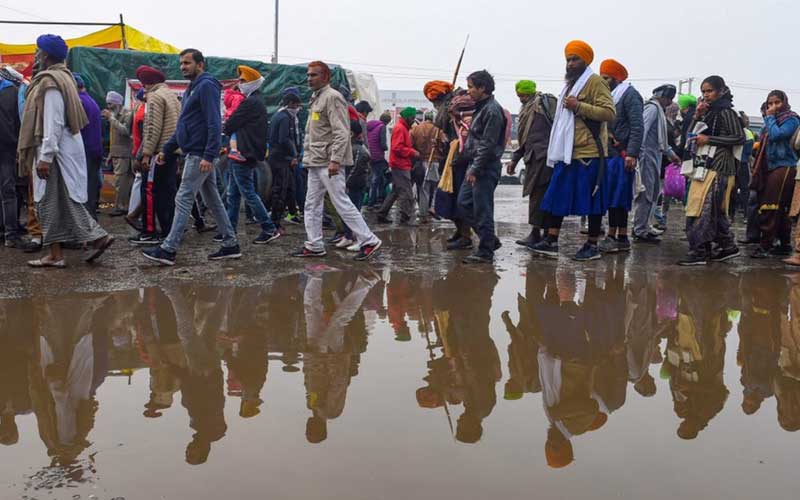 Rakesh Tikait made serious allegations against the government

During the farmers' agitation at UP Gate, Rakesh Tikait has made serious allegations against the government. He said that the government always lies. On June 26, memorandums were to be given to the Governor at various places including Dehradun and Delhi, but in Delhi, the farmers were left at different places by asking them to meet the MPs. This is the murder of democracy. Similarly, farmers have been arrested in Dehradun. Giving a strong message to the government, Rakesh Tikait said that if the arrested farmers are not released and not introduced to the governor, then farmers will intensify the movement across the country. Farmers will also march towards Delhi from UP Gate.

The farmers who reached LG House were stopped by the police, detained.

The farmers who reached the residence of Delhi's Lieutenant Governor Anil Baijal were stopped by the police. The farmers were insisting on meeting the LG to hand over the memorandum to him. National General Secretary of Bhartiya Kisan Union Yudhveer Singh, Delhi State President Virendra Dagar, and their comrades were detained at the entrance of LG House itself.

Near Gandhi Park in Dehradun protesters were stopped. At the same time, the farmers who came to visit the Raj Bhavan were stopped by the police by putting up barricades at Hathibarkala.

Given the increased trouble in Mohali and Panchkula, the inner roads of Mohali city have been completely sealed, due to which people are also facing problems. Here, the farmers left from Nada Sahib Gurdwara in Panchkula at around one o'clock in the afternoon. At the same time, from Mohali, the farmers traveled from Amb Sahib towards Yadvinder Chowk. During this, farmer leader Ruldu Singh said that on this day Emergency was imposed by Indira Gandhi. Remembering him, this front is being taken out. Farmers broke police barricades at Yadvinder Chowk.

Amid the agitation, there were rumors about the arrest of farmer leader Rakesh Tikait in many places. Denying this outright, Tikait said that the government is deliberately spreading such rumors because I had said that the farmer's children will run Twitter, tank, and tractor too. Tikait has appealed to everyone not to believe in any kind of rumor.

We are ready to deal with any situation: DCP, Panchkula

DCP Mohit Handa of Panchkula said that we have enough force to deal with any situation. We will try to handle the situation calmly. We hope that today's entire program of farmers will be completed without keeping law and order in jeopardy.

On the completion of seven months of Uttar Pradesh Kisan Andolan, farmers protested in Lucknow. Farmer leader Rajesh Singh Chouhan said that since one year there has been an undeclared emergency in the country. In protest against this, today we will submit a memorandum to the President through the Governor because the wheat of the farmers is rotting in the mandis.