Presidential elections on July 18, If needed, Counting to be done on July 21: Election Commission 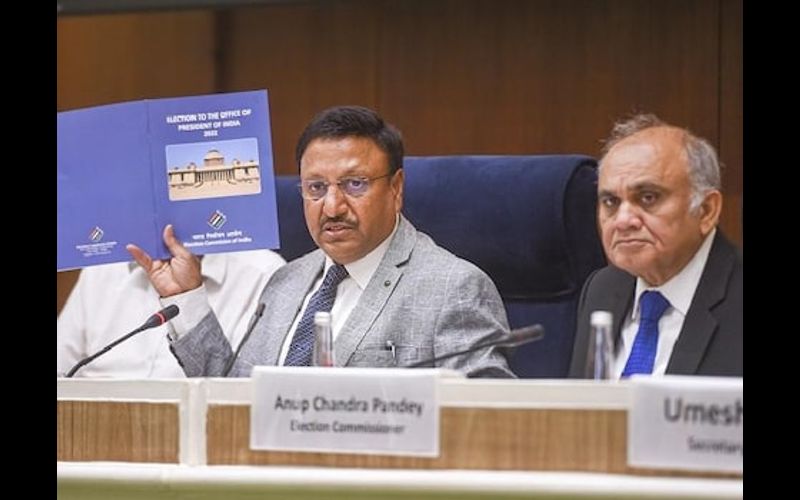 The Election Commission has announced the election schedule for the 15th President of India. Presidential elections will be held on 18 July and the counting of votes will take place on 21 July, if necessary. Chief Election Commissioner Rajiv Kumar announced the detailed schedule for the Presidential election here today. He told that the total number of voters will be 4,809, which includes 776 MPs and 4,033 MLAs. The Secretary-General of the Rajya Sabha will be the Returning Officer. The place of voting for the MPs will be the Parliament and that for the MLAs will be the Legislative Assemblies of the respective State, but votes can be cast at any other location on prior notice. For this, information has to be given at least 10 days in advance so that the voting can be arranged at that place. For casting vote, the commission will provide PAN on its behalf. The use of other PAN will render the vote invalid at the time of counting.

The Chief Election Commissioner clarified that the parties will not be able to issue any whip to their members. He said that trying to woo voters by bribe or other means comes under the category of crime and in such a situation the election can be declared illegal by the Hon'ble Supreme Court. Referring to the situation regarding Kovid in the country, he said that fortunately, the situation regarding Kovid is not serious at this time. Despite this, the Kovid protocol will be followed during voting. The Election Commission has directed the use of perishable materials in place of plastic materials to make the presidential election eco-friendly.

It is noteworthy that so far no political party has announced the name of its candidate for the top constitutional post. The new president has to take an oath by July 25. Talking about the year 2017, elections were held on 17th July, in which Ram Nath Kovind was elected as the President. For the election of the President, the members of Lok Sabha, Rajya Sabha, and Vidhan Sabha together form the electoral college. The electoral college is made up of 776 MPs (excluding nominated) and MLAs of the Legislative Assembly. The NDA is currently marginally away from the majority figure. The NDA will need the support of the BJD and the YSR Congress to make its candidate the President. Ramnath Kovind got 65.35 percent of the votes in the last election.