Presidential election announced, voting will be held on July 18; Results will come on 21st

The Election Commission has announced the dates of the elections by holding a press conference on Thursday afternoon. The term of the current President Ram Nath Kovind is ending on July 24. 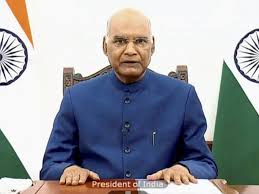 The President of India is elected according to Article 55 by the system of proportional representation by means of the single transferable vote. The President is elected by both the Houses of Parliament of India (Lok Sabha and Rajya Sabha) as well as the elected members of the State Assemblies for a five-year term.

The term of President Ram Nath Kovind is ending on 24 July 2022. Before this, the next and 15th President of the country will be elected. For the last 45 years, the elected President has been assuming office on this date. Presidential elections were last held on 17 July 2017.

Chief Election Commissioner Rajiv Kumar said that the voting for the Presidential election will be held on July 18. The counting of votes will be done on July 21. He also told that the term of President Ram Nath Kovind will end on July 24.

The President of India is elected by the members of the electoral college, which consists of elected members of both the Lok Sabha and Rajya Sabha houses of the Parliament of India.