The President said that reeling under the impact of COVID-19, the world, more than ever before, needs the healing touch of compassion, kindness and selflessness. 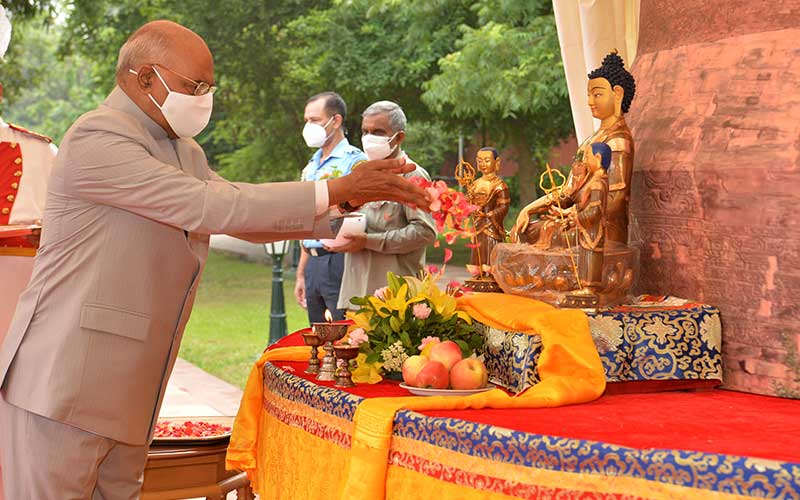 New Delhi: Application of Buddhist values and principles in addressing issues of global concern will help in healing the world and making it a better place, said the President of India, Shri Ram Nath Kovind. He was addressing the annual Asadha Poornima – Dharma Chakra Day being organised by the International Buddhist Confederation through a video message today (July 24, 2021). He said that it is important to stick to the essence of the teachings of the Buddha and not get lost in several different interpretations and variations of it. He noted that in this context, the objectives of the International Buddhist Confederation are laudable. He also praised IBC’s effort in providing a common platform for all Buddhist traditions and organisations to serve humanity.

The President said that he believed that the appeal of Buddhism goes much beyond the nearly 550 million formally ordained followers of the faith. People belonging to other faiths, and even sceptics and atheists feel attracted to the teachings of the Buddha. This universal and eternal appeal of Buddhism is due to its logical, rational and simple answers to the fundamental problems faced by human beings across time and place. The Buddha’s assurance of putting an end to suffering; his emphasis on universal compassion and non-violence; his message to pursue morality and moderation in all aspects of life, have inspired countless people over the last 2600 years since his first sermon at Sarnath on this very day.

The President said that the Buddha’s well documented life contains invaluable messages for humanity. Lord Buddha commanded great trust and respect even among his critics and opponents. They would become his followers. He had acquired this spiritual power because he remained steadfast in his adherence to the truth.

The President said that reeling under the impact of COVID-19, the world, more than ever before, needs the healing touch of compassion, kindness and selflessness. These universal values propagated by Buddhism need to be adopted by all in their thoughts and actions. The President expressed hope that today’s world gets inspired by the Buddha’s infinite compassion and resolves to overcome all sources of human suffering.

Early in the morning, the President planted a sapling of the Bodhi tree in the garden of Rashtrapati Bhavan. Among the dignitaries present on the occasion were Union Minister of Culture, Shri G. Kishan Reddy, Ministers of State for Culture, Shri Arjun Ram Meghwal and Smt. Meenakshi Lekhi and Secretary General, International Buddhist Confederation, Ven. Dr. Dhammapiya.