Many Indians who were trolling Tom Holland, the actor of the movie Spiderman, with #BoycottSpiderman were made to believe that the actor was paid for tweeting against PM Modi 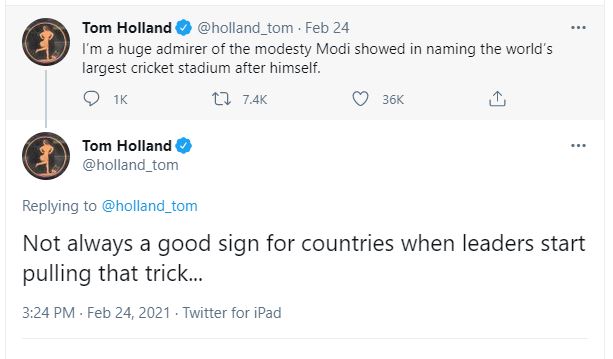 A cricket stadium was revamped in Motera, Gujarat. The newly done stadium can now house 1.10 lakh fans and this makes it the world’s number 1 Cricket stadium, second only to the Rungrado May Day Stadium in North Korea which can house more than 1.5 lakh people. This stadium once commemorated India’s first Home Minister Sardar Patel’s contribution to nation building.

After the revamp the Stadium was renamed after the current Prime Minister Mr Narendra Modi. The two bowling ends of the stadium has also been renamed, one after Reliance and the other after Adani.

Many people did not take happily to this change in name. Some took to cyberspace to show their displeasure and similarly many more joined in from across the world. One such person named Tom Holland also showed he was against the renaming of the stadium through his tweet “I’m a huge admirer of the modesty Modi showed in naming the world’s largest cricket stadium after himself.”

He did not stop there and followed it up tweeting “Not always a good sign for countries when leaders start pulling that trick...”. Indian twitter users were up in arms against him and soon they discovered that the name of the actor who plays a leading role in Spiderman is Tom Holland. Getting to troll an international Celebrity seems to be a favourite of the ‘right-leaning’ Indian who uses social media as their playground. They abuse, degrade and denigrate sometimes threatening them with bodily harm or rape if the celebrity is a female.

Luckily Tom lives abroad so they went on to start a hashtag blitz #boycottSpiderman since a Spiderman movie is going to be screened soon and they thought this will make him understand that he cannot vilify the Indian Prime Minister without a backlash.

But these Indian twitter users have done a blunder with this move of theirs. They were literally “barking up the wrong tree.” They had confused Tom Holland the British author and cricketer of the same name with the ‘Spiderman’ star. They should have read the profile of the person who had tweeted but in their hurry to get back to him in the same coin they missed the most important part of abusing – targeting it to the one whose words could be construed to be against their belief rather than going berserk in their anger.

The ‘Spiderman’ superstar has not reacted to the mix up and has not even showed his displeasure obliquely, maybe due to fear of losing out on his audience or maybe because his comments could give credence to those who took to damage his movie. Maybe that is why most Celebrities in India chose to not speak up.

If one thought that this misdirected hashtag blitz might be a one-off case – it is not. Most Indian fans were trolling Tim Payne on Instagram mistaking him for Tim Paine the Australian cricket captain around a month back following the latter’s team losing out to the Indian team.

This even goes back all the way to 2017 when Snapchat’s CEO had said that his app is “meant for the rich” and he is uninterested in expanding it to “poor countries like India and Spain” then the backlash had been against Indian’s own e-commerce website Snapdeal.