The Prime Minister said that in India cows are revered as mothers by Indians and livestock provides livelihood to 8 cr families. 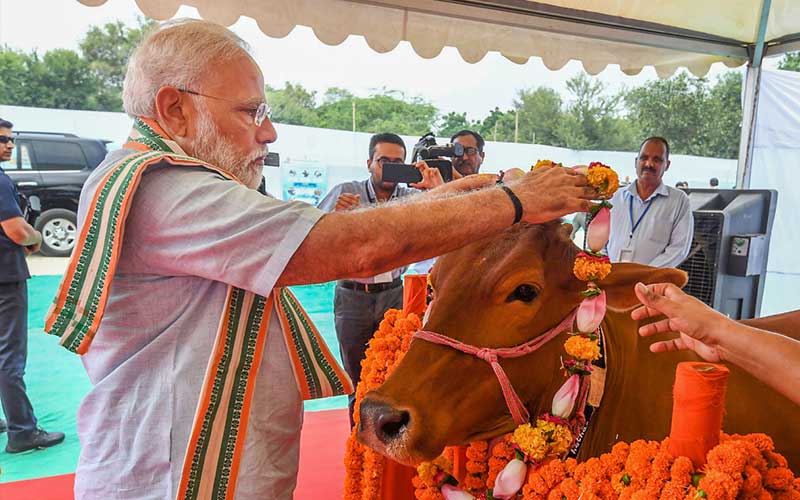 While laying the foundation stone of ‘Banas Dairy Sankul’ at the UP State Industrial Development Authority Food Park, Karkhiyaon, Varanasi, Prime Minister Narendra Modi took a dig at people who poke fun at the government initiatives to protect cows and buffalos in India.

The Prime Minister said that in India cows are revered as mothers by Indians and livestock provides livelihood to 8 cr families.

“People who make fun of cow-buffalo forget that the livelihood of 8 crore families of the country is run by such livestock.” Strengthening India's dairy sector is one of the top priorities of our government. In this series, the foundation stone of Banas Kashi Sankul has been laid here today,” PM Modi said.

He added, “I am happy that today UP is not only the largest milk-producing state in the country, it is also significantly ahead in the expansion of the dairy sector.”

The Prime Minister showed his firm belief in the importance of the dairy sector, animal husbandry and the new push in white revolution in improving the lives of farmers.

“Firstly, animal husbandry can become a huge source of additional income for the small farmers of the country, whose number is more than 100 million. Secondly, India's dairy products have a huge market abroad, in which there is a lot of potential to grow. Thirdly, animal husbandry is a great way for the economic upliftment of women, to further their entrepreneurship,” PM Modi said.

He added, “The fourth is that livestock is also a big basis for biogas, organic farming and natural farming. The Bureau of Indian Standards has issued a unified system for the country. An integrated logo featuring Kamdhenu cows has also been launched for certification. If this proof, this logo is visible, then the identification of purity will be easy and the credibility of India's milk products will also increase.”