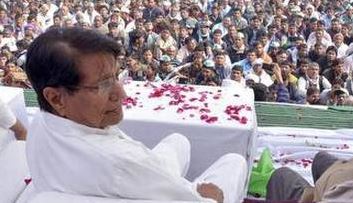 If the agricultural laws are implemented, farmers' land would be sold and farmers will be enslaved

Accusing Prime Minister Narendra Modi, RLD Chief Chaudhary Ajit Singh during a Farmers’ Meeting in Baghpat said, Modi belongs and works for capitalists while for the rest he just shows them dreams and tells lies to them.

Such strong words in Baghpat on the banks of Yamuna and only around 50 kilometers from Delhi should be ringing warning bells for the BJP top brass and workers alike. The Farmers’ Protests have made quite a democratic stir in farming community in the country. But in Western Uttar Pradesh the agitation has galvanised Jats like never before and with an increase in the bonhomie with their Muslim neighbours (traditionally Muslims have never sided with BJP) to that equation the odds seems unsurmountable for the right-ideology forces. Many seats like Baghpat (where Muslims constitute around 35% of the electorate and around 23% Jats) might just slip away from the ruling party in Lok Sabha Elections. There are another 50 more such seats in north India where the farming community alongwith traditional non-voters of Saffron forces can sway the election verdicts. Chaudhary made acerbic remarks against BJP-run government like “If the agricultural laws are implemented, farmers' land would be sold and farmers will be enslaved,” while addressing a farmers' meeting at Shri Jawahar Inter College, Bamnoli near Baghpat in Western UP. “The BJP government only shows dreams. Their representatives and ministers should be boycotted,” he exhorted. Save your turbans (Indians attach their honour with their turbans) or else your honour will end. If farmers do not come together today, their future generations will be in danger, Ajit Singh said, exhorting farmers to unite in their fight against the three central farm laws. How will the farmer, having two bighas of land, will hire counsel to face Ambani and Adani in court? he asked. The Food Corporation of India too has been made insolvent and rendered unable to pay MSP for crops, he alleged. The former Union minister also attacked the Yogi Adityanath-led Uttar Pradesh government and urged youths to uproot both the central and state governments. While targeting Yogi he said that Yogi had promised to clear farmers' dues and arrears in 15 days but did nothing. They make false promises again and again. Dates are given but the payment is not made. Sugarcane farmers were not paid in western Uttar Pradesh, he claimed. Former Prime Minister Chaudhary Charan Singh had enacted a law to seize erring sugar mills but this law was abolished by the BJP government in 2014, he said. Much was said about doubling farmers' income, but it was halved first and then finished, he alleged.