Prime Minister Narendra Modi has requested all the protesting farmers to read an eight-page letter written by the Minister of Agriculture and Farmer Welfare Narendra Singh Tomar. 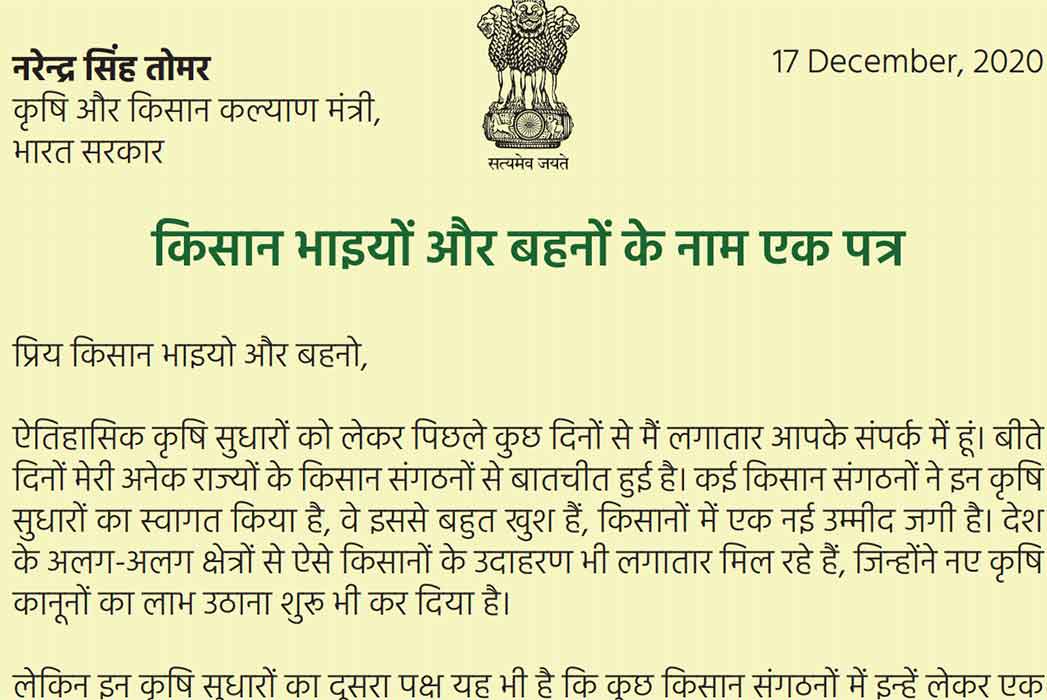 Prime Minister Narendra Modi has requested all the protesting farmers to read an eight-page letter written by the Minister of Agriculture and Farmer Welfare Narendra Singh Tomar.

The Prime Minister tweeted the letter from his Twitter handle with a message in Hindi. It says that the Minister of Agriculture Narendra Singh Tomar has expressed his feelings by writing a letter to the farmer brothers and sisters.

The message further said that Agriculture Minister is trying to have a polite dialogue.

PM Modi requested all the farmers to read it and he urged the countrymen “to make it reach to as many people as possible.”

The government is trying its level best to convince the farmers of the benefits of the three farm laws which they are opposing tooth and nail.

Minister of Agriculture and Farmer Welfare Narendra Singh Tomar has said in his letter that some farmers’ organisations are spreading lies and falsehood against the three farm laws.

Tomar said that he belonged to a farmer’s family and he understands their problems.

He has requested the farmers to identify those elements which are creating misunderstanding and confusion just for their vested interest and reject their views.

Tomar has narrated various government schemes such as PM Kisan Samman Nidhi etc which have been started in the country to benefit the farmers.

The letter aims to persuade the farmers that the government is concerned about their problems and the laws have been framed keeping in mind their interest.

He said that some people are spreading utter lies that farmers’ land will be taken away. He has assured the farmers that there is no such provision in the law.

In the end, he has said that the farmer should trust the government as these laws will make them independent and strong.