Prime Minister Narendra Modi will address the first public meeting in Jammu after the abrogation of Article 370. According to the official sources, PM Modi will gift projects worth 20 thousand crores. 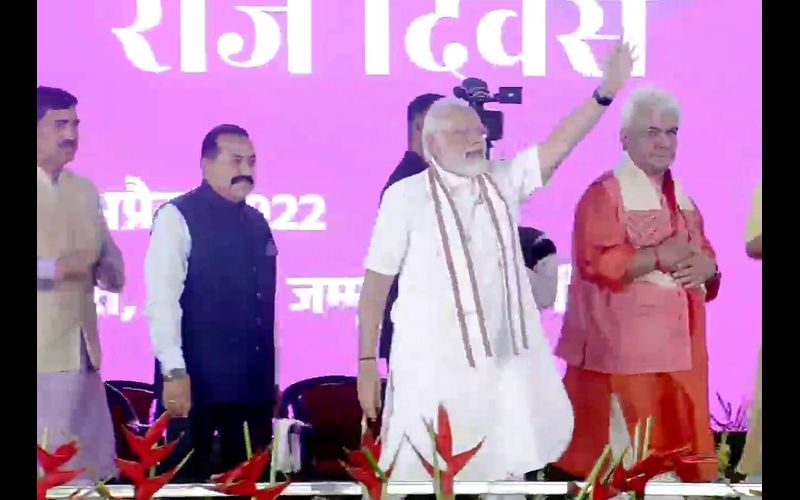 Prime Minister Narendra Modi will address the first public meeting in Jammu after the abrogation of Article 370. According to the official sources, PM Modi will gift projects worth 20 thousand crores. During this, the Amrit Sarovar scheme will also be announced. Prime Minister Narendra Modi has reached the meeting place in the parish of Samba. During this, Lieutenant Governor Manoj Sinha respected Modi with a Basohli painting.

Prime Minister Narendra Modi's Mann Ki Baat was heard by BJP National President JP Nadda with workers at Vasundhara Sector 11 in Ghaziabad. Earlier, before the arrival of BJP President JP Nadda at the UP gate, there was a jam. During this, the ambulance was pulled out from the wrong side. After the Mann Ki Baat program in Vasundhara, Ghaziabad, BJP National President JP Nadda said that we all just got to hear the 88th episode of Mann Ki Baat. This program is going on since 3rd October 2014. We all know that the Prime Minister has discussed the topics going on in society from time to time. PM has not spoken anything political in 88 episodes 88. Through Mann ki Baat, despite being in a political position, he has kept social issues in front of us without using politics.

PM Modi will inaugurate these projects; Qazigund-Banihal Tunnel (8.45 km) with a cost of a whopping 2027 crores, Bhumi Pujan of industrial projects worth 38000 crores, 108 Jan Aushadhi Kendras inaugurated in Jammu and Kashmir, Inauguration of 500 KW Solar Power Plant at Palli, and distribution of land ownership cards to farmers.

LG Manoj Sinha said that "PM Modi has given a new industrial scheme in Jammu and Kashmir. Since independence till now there were just Rs 15,000 cr investment, now we've proposal of Rs 52,000 cr while projects of Rs 38,000 cr will be inaugurated by the PM. We expect investment to cross Rs 70,000 cr."