This time India won a total of 61 medals including 22 gold in the Commonwealth Games held in Birmingham, England. In this, the country got medals for the first time in cricket, lawn balls, triple jump and walking. 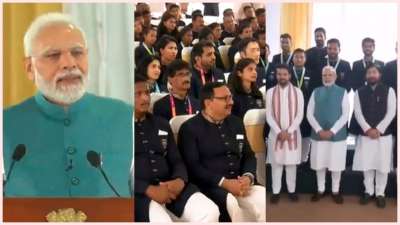 Prime Minister Narendra Modi met the players participating in the Commonwealth Games 2022 at his residence in Delhi today. The PM encouraged the players by participating in a program specially organized for them and appreciated their performance. During this, Union Sports Minister Anurag Thakur and Minister of State for Sports Nishith Pramanik were also present there. PM said that I am proud to meet the winners. He said that those who win and those who will win further, they all deserve praise. The Prime Minister said that we are doing well in the sports in which we are strong, but at the same time we are also leaving our mark in new sports.

This time India won a total of 61 medals including 22 gold in the Commonwealth Games held in Birmingham, England. In this, the country got medals for the first time in cricket, lawn balls, triple jump and walking.

India's performance in the Birmingham Commonwealth Games was excellent. India won a total of 61 medals including 22 gold, 16 silver and 23 bronze. The Indian team finished fourth in the medal tally. After this success of India, on Saturday, Prime Minister Narendra Modi met the medalists at his official residence. Sports Minister Anurag Thakur and Union Minister Nishith Pramanik were also present on the occasion along with the Prime Minister.

PM Modi said- I am glad that all of you took time out of your program and came to meet me at my residence as a member of the family. I am proud to talk to you like all other Indians. I welcome you all. In the last few weeks, the country has made two big achievements in the field of sports, he said. Along with the historic performance in Commonwealth Games, the country organized Chess Olympiad for the first time. India not only successfully organized the Chess Olympiad but also gave the best performance. I also congratulate all the players who participated in the Chess Olympiad and won medals.