PM Modi will attend the meeting and he will probably address it on Sunday. In this, he will guide the party leaders on other major issues including the upcoming Gujarat elections. The PM will also address the gathering at Parade Ground in Hyderabad on Sunday. 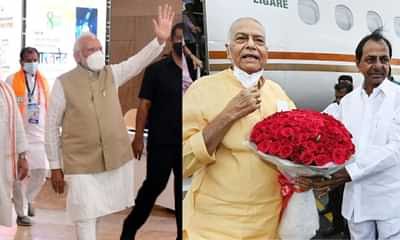 Prime Minister Narendra Modi reached Hyderabad on Saturday. During this, he tweeted that I have reached Hyderabad to take part in the BJP's national executive meeting. During this meeting, we will discuss many issues with the aim of further strengthening the party. After this, PM Modi participated in the meeting of the National Executive at the Hyderabad Convention Center.

Earlier, politics heated up between the ruling TRS and the opposition BJP in Telangana. On Saturday, Yashwant Sinha, the joint presidential candidate of the opposition, reached Hyderabad's Begumpet airport to welcome and receive him, CM K. Chandrashekhar and his entire cabinet reached. After some time PM Narendra Modi reached this airport, but only one minister of KCR arrived to pick him up.

Usually, when the Prime Minister reaches the capital of a state, apart from the governor, the CM and the ministers of the state also go to the airport to welcome him. KCR has already avoided going to the airport during PM Modi's visit. This is the third time in six months that CM KCR did not follow the protocol during PM Modi's visit. Earlier, PM Modi had come to Telangana to attend the 20th annual function of the Indian School of Business, then KCR moved to Bengaluru. Earlier, even during PM's visit to Hyderabad in February, KCR did not reach to receive him.

BJP's national executive meeting begins in Hyderabad from today. In this party's national president JP Nadda, Home Minister Amit Shah, Chief Ministers of 19 states and other senior leaders will be involved. The meeting will be held at the International Convention Center in Hyderabad.