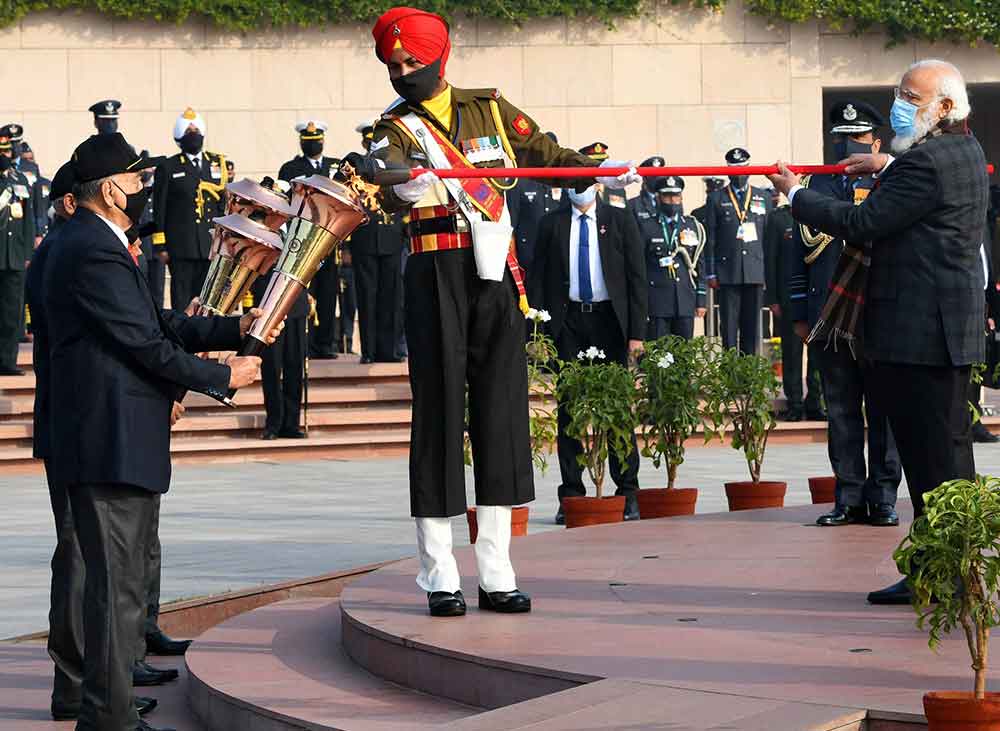 The event marked the beginning of a year-long celebration of India's victory over Pakistan's Army on December 15, 1971, which paved the way for the creation of a new country Bangladesh.

Earlier, Bangladesh was part of Pakistan and was known as East Pakistan.

It was a historic day for the country and the government of India has decided to celebrate it for a year starting from December 16.

The Prime Minister also lit a "Swarnim Vijay Mashaal" - a victory torch - at the National War Memorial at India Gate in New Delhi.

PM Modi took to his Twitter handle to pay rich tribute to the war heroes and wrote, "On Vijay Diwas we recall the unwavering courage of our armed forces that resulted in a decisive victory for our nation in the 1971 war.”

“On this special Vijay Diwas, had the honour of lighting the ‘Swarnim Vijay Mashaal’ at the National War Memorial," PM Modi added.

Defence Minister Singh unveiled the logo of ‘Swarnim Vijay Mashaal’. He tweeted, “On the occasion of ‘Vijay Diwas’ the logo of #SwarnimVijayVarsh was unveiled today. The nation will always remember the indomitable courage of the Indian Armed Forces during the 1971 war.” He also posted a picture of the release event.

Four Victory Mashaals (flames) were lit from the Eternal Flame of NWM.

“These Mashaals will be carried to various parts of the country including to villages of Param Vir Chakra and MahaVir Chakra Awardees of 1971 War. Soil from the villages of these Awardees and from areas where major battles were fought in 1971 are being brought to the NWM, a press statement released by the Ministry of Defence on December 15 said.