PinarayiVijayan, gets instated as the chief minister of Kerala

The ceremony was held in compliance with Covid-19 guidelines and took place after the Kerala High Court granted permission for its conduction on Wednesday. 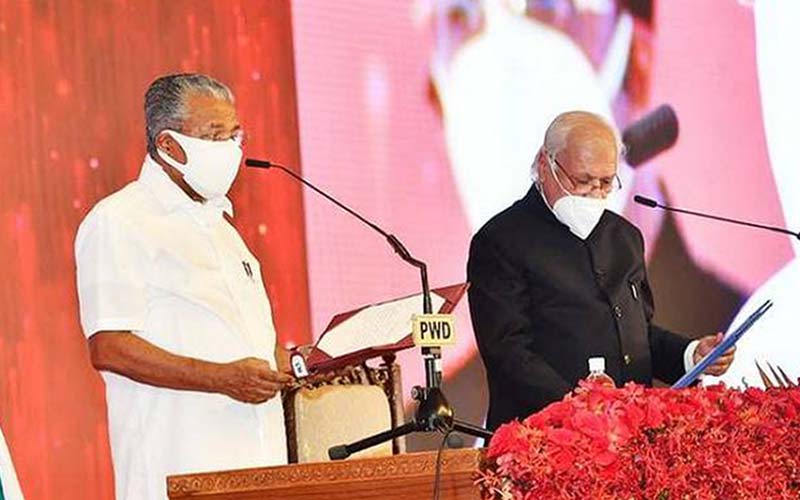 PinarayiVijayan, a senior CPM member, was sworn in as Kerala's chief minister for the second time on Thursday at the Central Stadium in Thiruvananthapuram. The oath of office was performed by Governor Arif Muhammad Khan.

Along with Vijayan, 20 members of the newly formed Kerala cabinet were sworn as well, including AK Saseendran of the NCP, AhammadDevarkovil, R Bindu and PA Mohammed Riyas of the Indian National League (INL).

The ceremony was held in compliance with Covid-19 guidelines and took place after the Kerala High Court granted permission for its conduction on Wednesday.

Apart from himself, PinarayiVijayan will lead an entirely new 20-member cabinet, which will have 12 CPM members and four CPI members.

Dr R Bindu, Chinchu Rani, and Veena George will join new cabinet, making it the first time that three women have become a part of a Kerala cabinet.

Veena George, a member of the CPI, would become Kerala's first female minister, it is likely that she will in all probability receive the health portfolio.

Dr Bindhu, a former Thrissur mayor who is also the wife of CPM State Secretary K Vijayraghavan, is expected to get the portfolio of higher education.

Kerala's new Left Democratic Front (LDF) government defied expectations by winning a landslide victory on the 6th of April assembly elections, shaking up the pattern of the state switching back and forth between the Left and the Congress. The LDF won 99 of the 140 seats available.