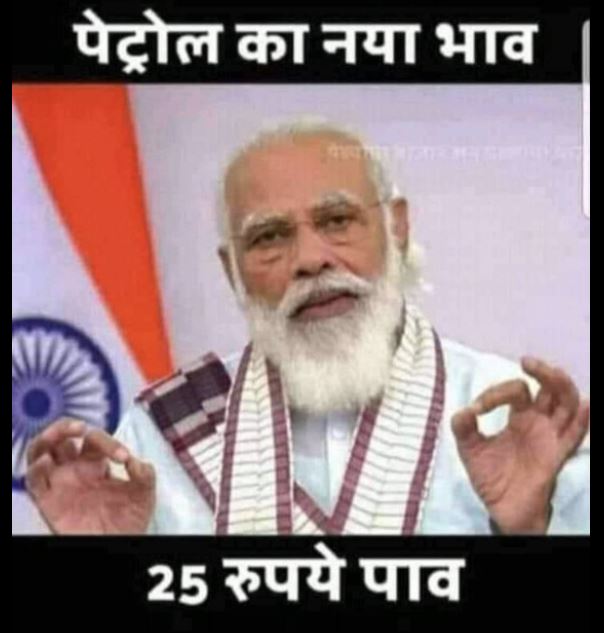 Hundreds of satirical memes have inundated the social media

Retail Fuel prices in India has been on fire for sometime. Petrol and diesel prices have again been hiked today. While petrol has become costlier by 26 paisa, diesel by 30 paisa. A litre of petrol now costs Rs 100.98 in Mumbai, the highest ever. In Delhi, petrol is about to touch Rs 95-a-litre mark.

Hundreds of meme have inundated social media space on the issue. Most satirically are trying to remind the government that it needs to take some action on this.

On a day when the price of Petrol in Venezuela is Rs.1.45 and Iran is Rs.4.50, this near crossing of Rs.100 mark cannot be just because of international crude price strengthening.

So on analysing the prices – we find that the base rate (Crude Oil and its refinering) is only around 30% - around Rs. 29, the Dealers get approximately 4%, and the Taxes over 64%.

Out of these taxes, the state governments levy a VAT ranging between 20 to 30 percent of the Petrol price (different States levy different rates of VAT) – around Rs 20. But the Central Government receives a lion’s share of the booty around 55%. More specifically, Excise duty is Rs. 31.80 on Diesel and Rs. 32.90 on Petrol, due mainly to the raising of excise duty by Rs 13 on petrol and Rs 16 on diesel between March 2020 and May 2020.

For a political party which used to continuously protest Petroleum products price rise, time and again, during the last government’s tenure this seems totally unacceptable. What grieves most Indians today is not the seeming lack of interest of the present dispensation to rectify it – but the support it still finds from the saffron party’s supporters even today.

Notable to add here is that earlier the Central Governments’ share of the Petrol prices was 16% which has now increased to 35%.

But now even Reserve Bank of India has suggested states and the Union government to contain the taxes on petrol and diesel. “Excise duties, cess and taxes imposed by the Centre and states need to be adjusted in a coordinated manner to contain input cost pressures emanating from petrol and diesel prices," the Monetary Policy Committee (MPC) of the Reserve Bank of India said.

“Going forward, the inflation trajectory is likely to be shaped by uncertainties impinging on the upside and the downside. The rising trajectory of international commodity prices, especially of crude, together with logistics costs, pose upside risks to the inflation outlook," MPC further added.