Ganga Dussehra in Haridwar has been canceled for worshipers due to the COVID-19 pandemic. According to the authorities, the district borders will be locked on June 20, and worshippers from neighboring states will not be permitted. 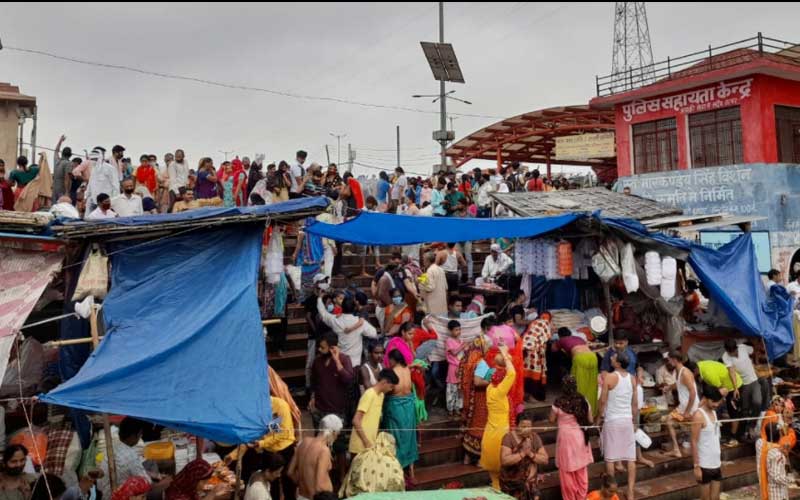 Hundreds of people were observed flouting Covid-19 guidelines when they gathered on the banks of the Ganga in Haridwar, Uttarkhand, on the occasion of Ganga Dussehra on Sunday, despite the restrictions. In the cities of Farrukhabad and Hapur, similar scenes were reported.

Thousands of devotees were observed today at Hapur's Brajghat, Uttar Pradesh, for the religious holiday Ganga Dussehra, flouting all safety regulations for Covid. It's unclear whether the gathering, which took place just as the second wave of Covid was beginning to give up, got approval from the authorities.

The restrictions set by the Yogi Adityanath government as the disease's second wave flared up still prohibit public gatherings, religious or otherwise.

One of the primary reasons for the rapid peaking of the second wave of the virus, which ripped through the country in April and May, destroying the healthcare system and killing thousands, was the massive gathering during the Kumbhmela Haridwar in April.

The gathering in Hapur and other cities coincides with the reopening of retail malls and eateries in Uttar Pradesh after a two-month hiatus. However, doctors and public health experts have warned that the rapid pace of unlocking, coupled with the general disregard for Covid-safety norms, may bring about the third wave of the disease much earlier than expected.

According to the government, a lack of Covid-appropriate behavior triggers the second wave after the first wave has passed. This was accompanied by the expansion of the virus's Delta version, which is predicted to play a role in the third wave as well.