Patanjali chief’s face saver after WHO Says Coronil "Not Reviewed"

Even though WHO has called out a lie – Patanjali fails to accept using wordplay. 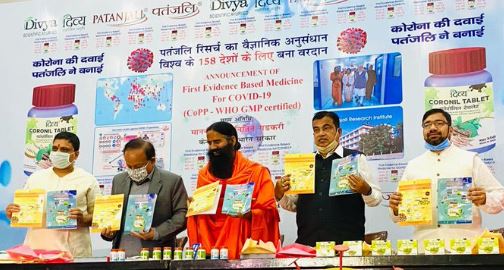 Coronil, a medicine that claims to boost immunity against COVID-19, developed by yoga guru Ramdev-promoted Patanjali Ayurved has run into yet another controversy over claims of certification.

At the launch event held last week attended among others by Union Health Minister Harsh Vardhan and Union Minister Nitin Gadkari, the Patanjali product was billed by the company as the "first evidence-based medicine for COVID-19".

The company claimed in its official communication as "medicine" which was CoPP and WHO GMP certified - meaning it held a certificate of pharmaceutical product (CoPP) and is recognised by the World Health Organisation's Good Manufacturing Practices (GMP). Both these standards approximately define quality assurance in medicinal products.

Rakesh Mittal, one of the top executives at Patanjali Ayurved, had doubled down on the claim saying, "Patanjali has made history in the field of Ayurveda as Coronil has been recognized by WHO as First Evidence Based Medicine for Corona," Mr Mittal had tweeted.

The WHO, however, called the bluff by tweeting in contrary to the claims "@WHO has not reviewed or certified the effectiveness of any traditional medicine for the treatment #COVID19," from the official WHO South-East Asia tweeter account.

Patanjali Ayurved managing director Acharya Balkrishna had to later climb down from the claims. He said, “We want to clarify to avoid confusion that our WHO GMP compliant COPP certificate to Coronil is issued by DCGI,

Government of India. It is clear that WHO do not approve or disapprove any drugs. WHO works for building a better, healthier future for people all over the world."

The opposition citing WHO's clarification attacked the centre. "I hope our Health Minister stops embarrassing the nation with such claims to promote Coronil. I strongly believe in Ayurveda but to claim it as a WHO guaranteed cure against COVID and endorse it, is nothing but cheating as well as misleading the nation," Shiv Sena MP Priyanka Chaturvedi tweeted.

This is not the first time the company has been in focus. Earlier its other products have also been in the frame.