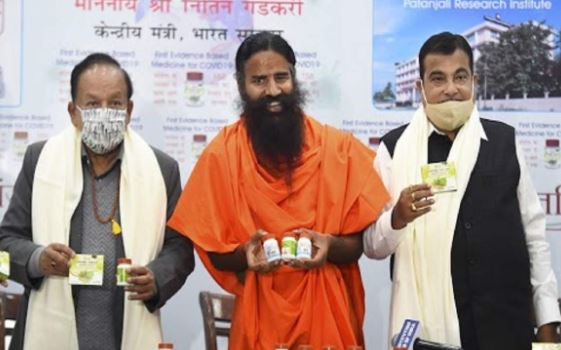 IMA has earlier demanded an explanation from Dr Harsh Vardhan, the Union Minister of Health, for promoting Coronil after WHO said it has not reviewed or certified effectiveness of any traditional medicine for treating Covid-19

Alongwith the ascendance of Right wing Hindu-appeasing political parties around a decade back, Ramdev had captured the mindscape of millions with his propagation of Yoga and ancient vedic-era medicines. So much so, that every other person could be seen rubbing his knuckles in India while travelling or in meetings; or the humble ‘lauki’ (bottle gourd) which used to sell for around Rs.2 per kg jumped multiple times to start retailing at Rs.30; or every other home in India having a potted ‘giloyee’.

The Poster-boy of Hindu renaissance who was vocal in his support to the right-wing politics and anything which could re-ignite superstition; unscientific myths or belief in herb-remedies went on to create a multi-million dollar conglomerate Patanjali. Patanjali was swift and almost gruesome in the way it stole supermarket space or market shares from erstwhile established MNCs.

Ramdev in his arrogance and because of the support he enjoys in right-wing political parties has time-and-again rode roughshod on many a toes. He has in the past made jokes about many and has also resorted to demean those who do not fit in his scheme of things.

However with time both Ramdev and right-wing political parties are trying hard to stay relevant and in contention. Ramdev for his own image creation and controlling the mindscape once again has gone aggressive in making tall claims and mocking others. Case in point is the ‘launch of Coronil’ with much fanfare and now calling “allopathy – a failed and stupid science”

But following the “allopathy – a failed and stupid science” comment and making mockery of thousands of doctors – the Indian Medical Association (the apex body of Indian doctors) has sent a legal notice to Ramdev threatening him of a Rs 1000 Crore defamation suit if he does not tender a written apology and post a video countering the statements by him.

Much before this notice, IMA had written to Chief Minister and Chief Secretary of Uttrakhand, demanding strict action against him. IMA Uttrakhand state unit President, Dr Ajay Khanna said, "In the letter, it is written that there is a lot of resentment among the IMA doctors against the statement of Baba Ramdev. The Union Health Minister has also sent a notice to Ramdev on the same stating that the statement is considered incorrect."

"In addition to a defamation case that will be filed soon, an FIR will also be lodged, if the government did not take concrete action on the same", Dr Khanna added.

After courting much controversy (which seems to be the real reason of his outburst), Ramdev has withdrawn his statements. It seems due to the pressure, his good friend from his friendly political party, Union Health Minister Dr Harsh Vardhan also had to write a strong-worded letter calling Ramdev’s remarks "inappropriate".

In his response to the Health Minister (who was even present during the launch of Coronil) Ramdev wrote, "We do not oppose modern medical science and allopathy. We believe that allopathy has shown immense progress in surgery and the lifesaving system and served humanity. My statement has been quoted as part of a WhatsApp message that I was reading during a meeting of volunteers. I am sorry if it has hurt anyone`s sentiment."