An important bill for electoral reforms in the country has been passed in the Rajya Sabha. The bill was passed amid uproar from the opposition. 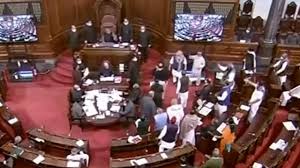 An important bill for electoral reforms in the country has been passed in the Rajya Sabha. The bill was passed amid uproar from the opposition. Earlier, the Lok Sabha had approved it on Monday itself. After the approval of both the houses, the bill for election reform will be sent for the President's signature. Under this, there is a provision to link the Aadhaar number with the voter ID card.

Earlier, when the cabinet approved this bill, it was said that linking Aadhaar with voter card will prevent the fraud caused by fake voter ID cards. The government had taken this decision on the basis of the recommendation of the Election Commission.

On the other hand, the bill to increase the legal age of marriage of girls from 18 to 21 years could not be passed in the Lok Sabha. Amidst the uproar of the opposition, the bill was sent to the Parliamentary Committee for consideration. Women and Child Development Minister Smriti Irani introduced the Child Marriage Prohibition (Amendment) Act, 2021 in the House. Due to the uproar, the Lok Sabha was adjourned till December 22.