Oxygen leak in a Nashik hospital; 22 patients on ventilators died

On Wednesday, 22 patients died at a Nashik hospital in Maharashtra after an oxygen tank leaked on the premises 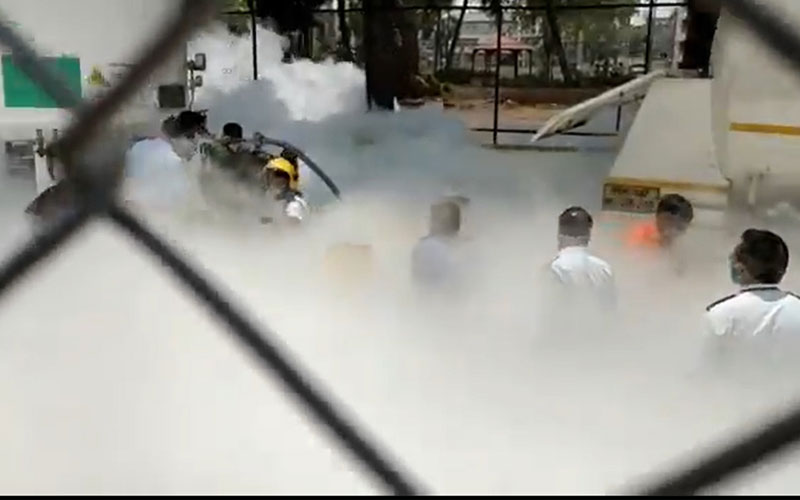 On Wednesday, an oxygen tank at Nashik's Zakir Hussain Hospital leaked killing at least 22 patients, an official said. At the time of the incident, there were 171 patients in the hospital.

"The oxygen supply was cut off for half an hour due to the leak, and those on the ventilator died," said Kailash Jadhav, Nashik Municipal Corporation Commissioner.

"People died as a result of a [leak in] a private company's oxygen tank, which caused the pressure to drop. This company is in charge of the tank's upkeep" said Suraj Mandhare, Nashik Collector.

"According to current information, 22 civilians have died at the Zakir Hussain municipal hospital due to a lack of oxygen," district collector Suraj Mandhare told media outlets.

Most of the victims were on ventilators and needed continuous oxygen supply. Zakir Hussain Hospital is a Covid-accredited hospital. About 150 patients were oxygen-dependent or required the use of ventilators.

Gas was seen leaking from the tanker outside the hospital, with thick white fumes quickly filling the area.

Rajesh Tope, the Maharashtra Health Minister, vowed that the government would look into the matter and conduct a thorough investigation.

"According to the details we have, patients on ventilators at the Nashik hospital have died. The leak was discovered in the oxygen tank that was providing these patients with oxygen. The hospital's patients may have died as a result of the interruption in supply," Mr Tope explained. "After the investigation is completed, we will make a release," he added.

As the oxygen supply was cut off, patients and their families became panicked. Families attempting to rescue the patients as they scrambled for air were seen in heartbreaking visuals.

To stop the leak, fire engines were rushed to the scene. Water was sprayed to contain the leak, and the firefighting team wore protective clothing as well.

About 31 of the 80 patients who need oxygen have been transferred to other hospitals.

The victims' families will be compensated with Rs 5 lakh each, according to a spokesperson for Chief Minister Uddhav Thackeray's office. According to the official, a high-level investigation into the matter will be conducted.

Prime Minister Narendra Modi expressed his condolences to the victims' families. He tweeted: "The tragedy that occurred at a hospital in Nashik as a result of an oxygen tank leak is heartbreaking. I'm saddened by the number of people who have died as a result of it. In this difficult time, my condolences go out to the bereaved families".

The tragedy at a hospital in Nashik because of oxygen tank leakage is heart-wrenching. Anguished by the loss of lives due to it. Condolences to the bereaved families in this sad hour.

Devendra Fadnavis, the former Maharashtra Chief Minister and a BJP leader have requested a thorough investigation into the incident.

"It's awful what happened in Nashik. Eleven people are said to have died, which is quite concerning. I recommend that the other patients are assisted and, if necessary, moved. We demand a thorough investigation" quoted Devendra Fadnavis.