Over 1,400 people were arrested during protests in support of hunger-striking Kremlin critic Alexei Navalny: Russia

On Wednesday, police detained over 1,400 demonstrators after many Russians attended rallies organised by supporters of hunger-striking Kremlin critic Alexei Navaln 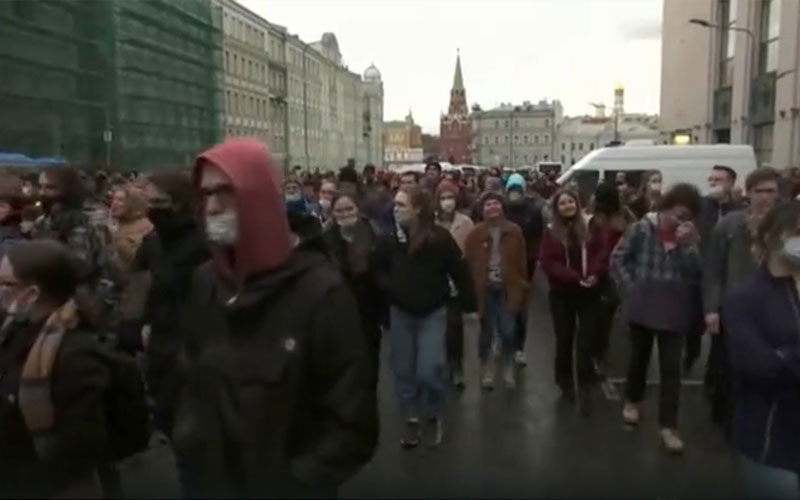 On Wednesday, police detained over 1,400 demonstrators across Russia as supporters of hunger-striking Kremlin critic Alexei Navalny held protests in dozens of cities to draw attention to his deteriorating health in detention.

On the same day that President Vladimir Putin delivered a state-of-the-nation speech urging the West not to cross Russia's "red lines," his spokeswoman was detained for ten days, and another close ally was detained.

"Some believe that this is one of the last gasps of a free Russia. We came out in support of Alexei... against the war in Ukraine and the hysteria surrounding it" Marina, a student at the Moscow rally, expressed her thoughts.

According to OVD-Info, an organisation that tracks demonstrations and detentions, 1,496 people have been detained, with 662 in St. Petersburg and 95 in Ufa in the Urals.

"Freedom to Navalny!" and "Let the doctors in!" chanted protesters in central Moscow. Yulia Navalny, Navalny's wife, attended the capital protest, where protesters chanted her name.

The opposition had hoped for the largest protests in modern Russian history, portraying them as an effort to save Navalny's life by persuading the authorities to allow him to be treated by his own physicians.

However, the crowd seemed to be smaller than during demonstrations earlier this year, before Navalny was sentenced to two and a half years in prison for parole violations related to what he said were politically motivated embezzlement allegations.

According to police, 6,000 people protested illegally in Moscow, but Navalny's YouTube channel claims the attendance was up to ten times higher.

After starving himself for three weeks, the 44-year-old, who survived a nerve agent attack that Russian authorities denied carrying out, is thin and frail, and his allies claim he risks kidney failure or cardiac arrest. If he dies, the US has warned Russia that it will face "consequences."

On Tuesday, Tatyana Moskalkova, the state's human rights commissioner, said four doctors from outside the federal prison service visited Navalny and found no significant health issues. He has been held like every other inmate, according to Russia.

The dispute over Navalny's fate has become a flashpoint in Moscow's deteriorating ties with the West, which have already been exacerbated by economic sanctions, diplomatic expulsions, and a Russian military buildup near Ukraine.

Human rights experts from the United Nations have urged Moscow to allow Navalny to be medically examined outside of Russia. They said he was being kept in "conditions that could amount to torture," and that his life was in danger.